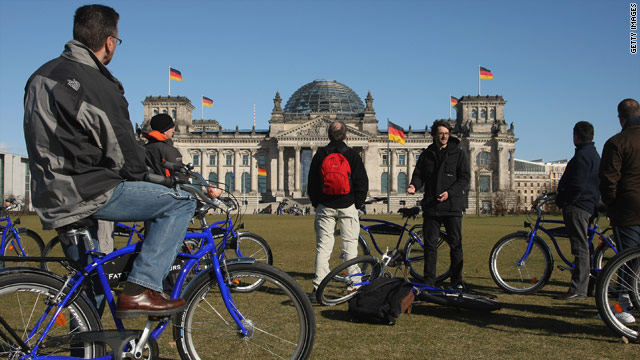 A group of tourists takes in the Reichstag on a cloudless day last spring. Bicycle tours are popular in Berlin.
STORY HIGHLIGHTS
RELATED TOPICS

Editor's note: CNN's Insider Trip Tips taps staffers around the globe for a local's look at places where they work and live.

Berlin, Germany (CNN) -- Berlin, Germany, mixes the old and the new, the west and the east with creativity and culture. Once the center of attention for a worldwide controversy (remember the Berlin Wall?), it's now an increasingly popular European destination.

The city is made up of 23 distinct, character-filled districts and is home to the Reichstag, the Berliner Dome and the Brandenburg Gate. But it's the areas outside the typical tourist locations that offer the real flavor of the capital.

CNN International reporter Frederik Pleitgen has lived in Berlin since 2000. He shares his favorite city spots in this CNN Insider Trip Tips:

That it must be a really expensive place. In fact, there are very few cities that offer more quality of life for very little money. 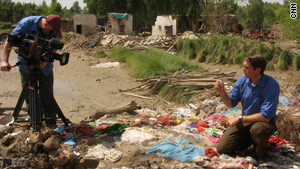 Frederik Pleitgen, right, on assignment here in Pakistan, is based in Berlin, Germany.

Hartmanns in downtown Kreuzberg has lovely food at affordable prices and a lovely atmosphere.

Café am Neuen See, a beer garden in the Tiergarten (Berlin's Central Park) with a lovely lake in the middle. If you want to work out after having a cold beer, you can rent a rowboat.

Where is the best place to people-watch?

The cafes in Prenzlauer Berg near the Kollwitzplatz are wonderful places to watch people in the summer.

The top of the broadcast tower in central Berlin offers a beautiful view of the city, but the Dome in the Reichstag is also wonderful.

What is your favorite neighborhood? Why?

My favorite neighborhood is Charlottenburg around the Kurfuerstendamm because it offers big city flair and yet is laid-back and easygoing.

Walk through the Brandenburg Gate!

The tourist trap worth seeing is the Reichstag, which always has really long lines to queue up, but inside you can see the entire history of Europe in the 20th century. From graffiti the Russian soldiers left when they moved into Berlin at the end of World War II to the great modern architecture of the unified Germany that was built into the shell of the old Reichstag.

Panorama, located in Berghain, is one of the coolest clubs in the world.

Currywurst from the restaurant Curry 36 -- though that is not everybody's thing. Currywurst is a Berlin dish with a massive cut-up sausage that has ketchup and curry sauce poured over it. You should eat it with fries with ketchup and mayo and a beer.