Smartphones abroad: What to know before you go 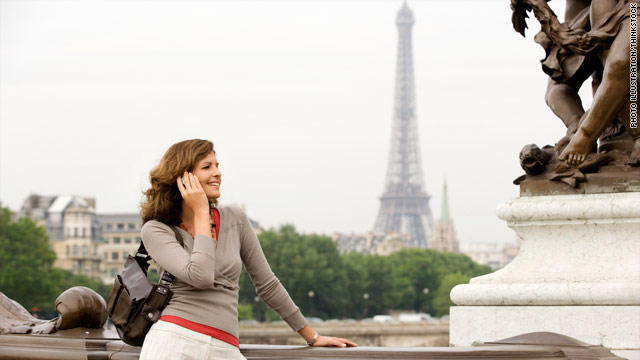 Smartphone bills can shock you once you've returned from your travels. Have a plan before you go to avoid outrageous fees.
STORY HIGHLIGHTS
RELATED TOPICS

(CNN) -- Sarah Evans was in Canada for just 18 hours in May but incurred a $700 phone bill in her limited time there.

"I sent four text messages, was on the phone for 20 minutes and used the wireless aircard," the Elgin, Illinois, resident said. "I opened my bill and all the blood drained from my face."

Her experience is not unusual. Though Evans eventually got that money credited back to her account, stories about outrageous phone bills are common enough to make roving mobile customers think twice. Experts say the most important thing travelers can do to prevent this from happening is take precautions before the trip.

If you don't, companies can take advantage of you, said Christopher Elliott, a consumer travel advocate.

"For every $7,000 phone bill that you hear about, there are about 100 others that don't get media attention and actually end up paying their bill," Elliott said. "So carriers want to keep that going."

Evans set up alerts on her computer's calendar, reminding her before every international trip to call AT&T and sign up for a data plan.

"If you travel without preparation, this is an open invitation for you to pay out money that you don't need to pay out," said Tom Hall, travel editor at Lonely Planet. "Certainly call your carrier before you go overseas."

Hall travels with his iPhone and said it's important to view any smartphone as an "occasional device," rather than a constant attraction when overseas. When he's not using it, he puts his phone in flight mode, which prevents it from receiving e-mails, calls or texts.

He attributes outrageous phone bills in part to the excitement of traveling -- it can sometimes cloud your judgment.

"You're using your phone with gay abandon because you want to tell people that you're in this amazing part of the world," Hall said. "People are always wise after the event."

Aside from keeping your phone off or at home, being prepared is the best way to prevent unnecessary charges, Elliott said. He recommends using Skype or Google Voice to communicate overseas, using Wi-Fi wherever available.

No matter what you choose to do, call your carrier beforehand and find out what you can and cannot do while abroad as well as if your phone will even work in the country you plan on visiting.

"Your phone is a ticking time bomb when you go overseas," Elliott said. "When you step off the plane and power up your phone, the cellular phone agreement that you have is no longer in effect."

If your phone is capable, Kevin C. Tofel, a staff writer for GigaOM.com, said buying services overseas is both easier and less expensive.

Tofel has a subscription to global wireless network Boingo, which offers more than 100,000 Wi-Fi hot spots all over the world for $7.95 per month.

When using your phone outside of Wi-Fi hot spots, getting it to work on another country's networks is a bit trickier.

The United States operates on CDMA networks, while most other countries use GSM networks. Phones that can operate on GSM networks contain SIM cards in them, like certain Blackberries and the iPhone. These phones can function on different networks, depending on the SIM card that's inserted.

"Unlike the United States where we only have a few carriers, overseas it's very common to pay by the month because there are so many carriers over there competing for your business," Tofel said.

This drives down the price and increases the availability of SIM cards, which serve as the gateway to a network, said Tofel, who recently purchased a SIM card in a vending machine and reloaded it at a gas station while abroad.

There is one notable hang-up, however. To use a phone overseas, even if it is GSM-compatible, you must first have your carrier in the United States unlock it so it works with other carriers, Tofel said.

"The iPhone is a bit of an outlier," he said, noting the device's strict contract with AT&T. "But if you have a Blackberry or some other Android for example, you can request the carrier to unlock it."

There is a way around unlocking the iPhone, and though legal, it's looked down upon, Tofel said.

"Jailbreaking does unlock it from AT&T's network," he said. "But would most consumers do that? Probably not." Doing so could give Apple or AT&T the right to refuse you service if something were to happen to your iPhone.

So travelers are left with few options, and some rack up higher bills than others.

For example, a global data plan from AT&T could cost anywhere from $24.99 a month for 20 megabytes to $199.99 a month for 200 megabytes, and that doesn't include calling capabilities or the extra fees if you go over your monthly allowance of data. You can sign up for and cancel the plan at any time; AT&T will prorate the charges.

Similarly, Verizon advertises a Global Travel Program, a monthly access plan and a pay-as-you-go plan. For most countries besides Mexico and Canada, pay-as-you-go data can cost 2 cents per kilobyte -- or $20.48 per megabyte.

AT&T and Verizon both offer a list of the countries where service is available.

"Downloading large amounts of data is something that's going to cost you," Hall said. "So make sure your applications are downloaded before you go."

Though cell phone carriers do offer tips and estimations to keep data use in check, many smartphone users go over their budgeted allowance anyway.

"I think because it's so complicated," Tofel said. "I find it overwhelming and confusing for the average consumer."

Some services will send you a text message when you're getting close to using up your allotted data, but Tofel suggests keeping track on your own -- either with an app on your phone or by checking your bill online.

Just make sure keeping track of the charges won't cost you a bundle.