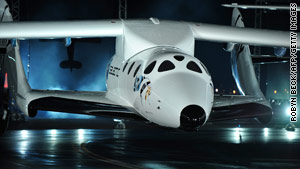 The VSS Enterprise completed a free flight from a mothership at 45,000 feet to a landing in California.

(CNN) -- A pair of pilots flew the world's first manned commercial spacecraft over California's Mojave Desert on Sunday, though they were the only ones aboard.

The mission was a test flight for Richard Branson's dream of affordable space travel and put his vision a step closer to reality, he said after watching the spaceship land.

"Now, the sky is no longer the limit, and we will begin the process of pushing beyond to the final frontier of space itself over the next year," Branson said, according to a statement released by his company, Virgin Galactic, which is behind the project.

The spaceship, called the VSS Enterprise, completed a successful free flight from a mothership at 45,000 feet (13,700 meters) to a landing in Mojave, California, Virgin Galactic said.

"This was one of the most exciting days in the whole history of Virgin," Branson said Sunday, according to the company's statement. "I watched the world's first manned commercial spaceship landing on the runway at Mojave Air and Space Port and it was a great moment."

His company said that the two chief goals of the flight were for the VSS Enterprise to perform a clean release from its mothership and for the pilots to free fly and glide back to its destination in Southern California.

Preparations for Sunday's flight were extensive, Virgin Galactic said. The mothership, named Eve, flew 40 times, including what the company said were four captive carry flights of "spaceship and mothership mated together."

Virgin Galactic said that other goals for the flight were also met, including the verification that all systems worked before and after clean release from the mothership and evaluation of handling, stalling, and stability.

"Virgin Galactic is now well on the way to becoming the world's first commercial space line with 370 customer deposits totaling $50 million," the company said in its statement.

Boeing: Let us fly you into space

Virgin Galactic said that future commercial operations will operate at New Mexico's Spaceport America, where final preparations are under way for a finished runway inauguration ceremony on October 22.

Now, the sky is no longer the limit, and we will begin the process of pushing beyond to the final frontier of space itself over the next year.
--Richard Branson
RELATED TOPICS

Eventually, the 60-foot long rocket plane will be taken 60,000 feet above the Earth by its carrier and fire rockets to propel itself into space. The test-flight program is expected to continue through 2011, going first to a free glide and then to a powered flight before commercial flights begin.

Virgin Galactic has said that it envisions one flight a week for its spaceship, with six tourists aboard.

Each will pay $200,000 for the ride and train for at least three days before going. About 80,000 people have placed their names on the waiting list for seats.

"What we want to be able to do is bring space travel down to a price range where hundreds of thousands of people would be able to experience space, and they never dreamed that [they] could," Branson said last year.

He has said he hopes the technology will lead to a new form of Earth travel, jetting people across oceans and continents faster through suborbital routes.

"The VSS Enterprise was a real joy to fly" Siebold said Sunday, according to the company's statement, "especially when one considers the fact that the vehicle has been designed not only to be a Mach 3.5 spaceship capable of going into space but also one of the worlds highest altitude gliders."