Best of both worlds in Ghent, Belgium 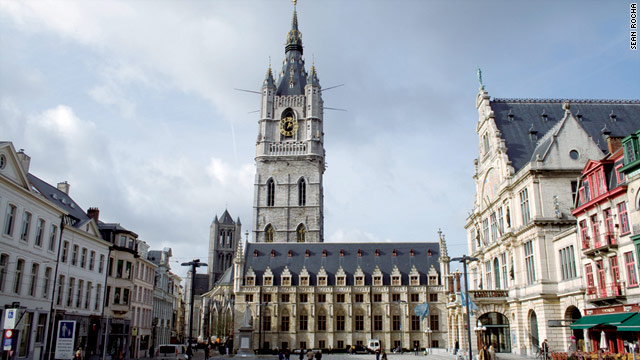 (Travel + Leisure) -- Its flemish sisters Antwerp and Bruges may be better known, but the town of Ghent, a 30-mile drive northwest of Brussels, has the best of both worlds: stylish new restaurants, bars and boutiques that compete with Antwerp's line centuries-old cobblestoned streets similar to those in Bruges. Together, they bring a palpable energy to this city of roughly 240,000.

In the Middle Ages, Ghent (Gent to the Flemish and Gand to the French) grew fantastically rich on cloth and wool and was the second-biggest town in Europe, after Paris. Today, its medieval heritage is on view on the Graslei, an old merchants' street that runs along the bank of the Leie River, where you'll find Gothic guild houses with stepped roofs and ornately carved façades.

University students account for 15 percent of the population, and on weekends they fill the Old City's Friday Market square and the pint-size cafés of arty neighborhoods such as Patershol, to the north. Just east of the Graslei lie two of Ghent's great monuments -- St. Nicholas church and St. Bavo Cathedral --and, in the ultimate juxtaposition of the sacred and the profane, Vlaanderenstraat, a narrow street that leads practically from the steps of the cathedral's door to Ghent's small red-light district and has become the center of cutting-edge design and clothing shops.

Ghent's hotel scene was once dominated by generic chains, with the occasional offbeat option such as the Boatel (doubles from $115), a moored canal boat refashioned into a seven-room floating hotel. The past few years, however, have seen an explosion of chic inns.

The husband-and-wife team behind Chambre Plus (doubles from $125) run a cooking school in the cellar where guests learn to make Belgian chocolate. Upstairs, you'll find three spacious guest rooms -- the best of which is the honeymoon suite, with private access to a vine-covered garden.

At the family-run Hotel Harmony (doubles from $200), top-floor rooms have views of the Kraanlei canal and the city's tiled rooftops.

Vlaanderenstraat is the city's ground zero for shopping. The latest boutique arrival: Switzerland-based Vitra, which sells Midcentury Modern furniture by such legendary designers as Charles and Ray Eames and Jean Prouvé. For more local finds, head to Eva Bos, who makes custom vintage-style jackets and dresses. Pick up one of her tailored, Audrey Hepburn-inspired evening gowns.

Caroline Naudts was so taken with Belgium's emerging fashion scene that she opened Het Oorcussen to showcase innovative designers such as Ann Demeulemeester and Dries Van Noten. Around the corner, Naudts's brother Frank runs Obius, a clothing boutique with Martin Margiela sweaters and Veronique Branquinho heels.

The Gothic spires of St. Bavo Cathedral are one of the town's most recognized landmarks, but inside the church is the true treasure -- the 15th-century altarpiece Adoration of the Mystic Lamb, a towering, multi-panel painting by Jan van Eyck.

Farther west, the Design Museum Gent is a building in two parts: the old wing, an 18th-century mansion that showcases re-creations of domestic life in that era; and next door, a modern extension with rotating exhibitions and a permanent collection that ranges from early-20th-century Art Nouveau cabinets by Henry van de Velde to whimsical 1970's Flemish furniture.

A two-story, white-walled space in the southern part of the city, Stedelijk Museum voor Actuele Kunst (S.M.A.K.) is one of the best contemporary art museums in Belgium, with a permanent collection that includes works by late-20th-century artists such as Joseph Beuys and Luc Tuymans.

Brussels-based designer Antoine Pinto was one of the first to put Ghent on the traveler's map in 2003 with the stylish Belga Queen (lunch for two $42), a cavernous restaurant with a wood-beamed ceiling and stainless-steel accents. The menu includes updated Belgian classics such as eel stewed in cream and herbs.

Pinto's magic continues at his newly opened Brasserie Pakhuis (dinner for two $91), the place to go in town for oysters, with an Art Nouveau glass roof and cast-iron interior that could have been built by Gustave Eiffel.

Opposite the towering St. Nicholas church, you'll find the Michelin-starred C-Jean (dinner for two $200), where the nine-course seasonal menu of local specialties such as grilled herring and beef carpaccio with clams is lighter than it sounds.

To sample the best in Belgian ale, head to the cozy Het Waterhuis aan de Bierkant (drinks for two $9), overlooking the Leie River. What to try: one (or more) of the 22 beers brewed by Trappist monks. Rochefort and Orval are our favorites.