Flying can be 'hell' for tall passengers 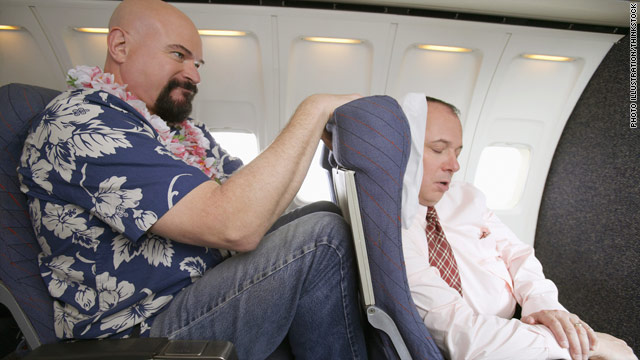 Legroom is usually the biggest issue for tall travelers. Some push back when someone in front tries to recline.
STORY HIGHLIGHTS
RELATED TOPICS

(CNN) -- Standing 6 feet 11 inches tall, Quartknee Kwatek couldn't take it anymore when he was once forced to sit in an economy class middle seat on an international flight.

"Right after takeoff, I'm like, I can't deal with this, I'm totally boxed in," Kwatek recalled. "So I just went and sat in the bathroom."

The San Francisco, California, resident closed the door, put the seat cover down and relaxed with a book.

In those pre-9/11 days, he was able to lock himself in the lavatory for a long time before anyone became concerned, Kwatek said. When a flight attendant finally demanded to know what was going on, he explained his plight and she moved him to first class.

Most average-sized Americans already feel squeezed in like sardines when it comes to air travel in coach, but few can truly understand the discomfort of passengers who are much taller.

"Imagine being in a seat and you can't put your legs down at all," said Everard Strong, a magazine publisher in Concord, California, who is 6 feet 9 inches tall.

"Your toes will never touch the ground for the whole flight because your knees are resting against the seat in front of you. ... If the person in front of you decides to lean their chair back, then you just sort of enter a whole new level of hell."

As debate rages over how to accommodate overweight passengers on planes, some tall fliers who can barely wedge themselves into seat configurations designed for much smaller bodies are speaking out too.

"There are many, many ways for you to change your weight, but you cannot change your height," Strong said.

With his stature, the tray table doesn't click all the way down when he sits, while Kwatek's doesn't come down at all. The seats are also too low for Kwatek to rest his head, so he can rarely sleep on flights. Meanwhile, Strong worries about deep vein thrombosis, a potentially deadly condition that can develop when people sit still for a long time.

You don't have to be as statuesque as Strong and Kwatek to feel cramped, but tall fliers don't have a whole lot of options in coach.

"It's entirely up to the airlines how they do that," he added.

There are many, many ways for you to change your weight, but you cannot change your height
--Everard Strong, tall traveler

The FAA does require passengers be able to sit belted and with both armrests down to comply with safety standards, so most carriers now have policies on travelers who are too obese to fit into one seat.

Many airlines require fliers who spill over into their neighbor's space to buy a second ticket, which may or may not be refunded later.

But tall passengers without weight issues generally have no trouble with the horizontal dimensions of a coach seat.

Their main concern is legroom, especially on long flights. If they can't afford first or business class, they try to snag precious emergency exit row seats, which allow more space for long limbs; or the bulkhead area, which can sometimes offer some relief too.

But it's not so easy anymore.

With more planes flying full and with some airlines saving those seats for their frequent fliers, the options are becoming more limited. Delta, for example, has "Preferred Seating," in which a number of "choice" economy seats are set aside for the airline's Medallion status members.

Other airlines, such as United with its "Economy Plus" program, now charge extra for extra room. A passenger choosing United's option on a 1½-hour flight from San Francisco to Las Vegas, Nevada, for example, would pay $24 extra each way for up to 5 extra inches of legroom.

"Such a small price to bring such happiness to your legs," United says on its website.

Critics say airlines should do more to accommodate passengers of all sizes, including those who are tall, and stop taking a one-size-fits-all approach to fliers.

"It doesn't take rocket science to see there are people who are not going to fit within those parameters," said Brandon Macsata, executive director of the Association for Airline Passenger Rights.

"The passengers who do contact us who are tall, very tall, all express how they had a terrible flying experience because they simply were uncomfortable."

Macsata said one solution would be for airlines to retrofit one or two rows in the coach cabin with seats that are larger and have more legroom, which would be set aside for passengers who have trouble squeezing into the traditional configuration.

Kwatek -- the 6-foot-11-inch webmaster for The Height Site -- supports such a move.

But 6-foot-9-inch-tall Strong doesn't, saying that he's not demanding special rights. He'd rather see airlines give tall fliers first dibs on already-existing roomier seats and acknowledge that "some guy who is 5-foot-2 does not necessarily need to be in the bulkhead just because he wants to be."

For now, Kwatek and Strong try to at least book aisle seats, and both arrive at the airport hours before their flights, hoping that once gate agents see their impressive statures in person, they will be more likely to find them better seats. The strategy works most of the time, Strong said.

Once in the air, both men say they ask passengers in front of them who try to recline their seats to be considerate and not do it. When someone still insists, Strong just pushes back, he said.

"People are getting taller. At some point, there are going to be enough people complaining that something is going to have to be done," Strong said.

If you are tall, how do you deal with flying in economy class? What options do you think airlines should offer? Let us know in the comment section below.