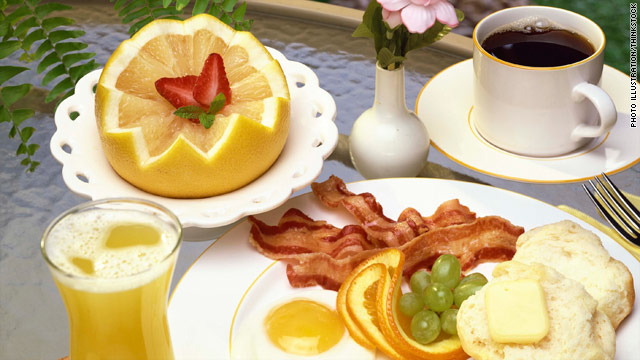 (CNN) -- To ensure a happy hotel guest, offer excellent service, provide a comfortable bed and never, ever underestimate the power of a free bagel: After a good night's sleep, many travelers these days are expecting -- and receiving -- a good breakfast.

You know the kind, included in the price of your stay and often served in a room just off the lobby of a Best Western or a Hampton Inn -- the quiet space that suddenly becomes the center of attention for several hours in the morning.

There's just something very comforting about waking up in a strange city and knowing your first meal is ready and waiting for you as you start your day -- no searching around required.

"It keeps you on property -- you don't have to go out to a Starbucks or a McDonald's. That's so convenient, it plays a huge role," said Jan Freitag, vice president at STR Global, a company that tracks data for the hotel industry.

"A lot of the items on the menu are so that you can actually take them with you on the road for a snack for late morning or lunch. I think a lot of people think that they save that way as well."

Breakfast is big, and hotels know it.

Seventy percent of U.S. leisure travelers consider getting a free breakfast included with the room rate as extremely or very influential in their selection of a hotel or resort, according to the Ypartnership/Harrison Group 2010 Portrait of American Travelers.

Poll Results
What is your favorite hotel amenity?

Results based on a nonscientific CNN.com poll. About 11,000 people clicked on the survey October 12-19.
RELATED TOPICS

Business travelers like it too: 63 percent of them say a free breakfast is extremely or very desirable when they choose a hotel or resort, according to the Ypartnership/Yankelovich Inc. 2009 National Business Traveler Monitor.

(It's not really free, of course. Hotels roll the cost into the room rate.)

But many hotels these days are boasting "hot" breakfasts, where guests may find scrambled eggs, sausage and French toast.

You'll mostly find the complimentary breakfast in the midscale category of hotels, especially those that don't have a restaurant on the premises, like Holiday Inn Express or Comfort Inn. More than 90 percent of those properties offer the amenity, according to STR Global.

But ironically, the more you pay for your room, the less likely you'll get a free breakfast.

The Waldorf Towers -- on the upper floors of The Waldorf Astoria in New York -- is among the very few luxury hotels that offer the perk. Only 4 percent of the properties in this category do the same, STR found.

"They have a restaurant, and they want you to pay for your breakfast," said Daniel Mount, associate professor at Pennsylvania State University's School of Hospitality Management.

"And at places like that, I don't think free breakfast is necessarily important."

People who stay in full-service luxury hotels are looking for an enhanced experience -- service and food options that a buffet probably won't offer, Susskind added.

The start of 'breakfast wars'

But breakfast has become such a standard perk at some of the other hotel chains that they now compete on the basis of their morning offerings, Mount said.

Embassy Suites, for example, touts itself as the only hotel brand that features cook-to-order omelets as part of its complimentary breakfast. More than 9,000 omelets are served daily, and it's by far the most requested breakfast dish, the company says on its website.

"That is such a powerful part of that brand," said Scott Smith, who once worked for Embassy Suites and is now an instructor at the University of Central Florida's Rosen College of Hospitality Management.

He recalled that when he asked guests what they liked about their stay, they almost always mentioned the cooked-to-order breakfast.

The "breakfast wars" really took off in the mid-1990s, when some of the lower-tier hotels realized that they couldn't continue cutting their room prices without eating into their already low profit margins. So they began competing on value instead, Smith said.

Meanwhile, the late '90s marked the rise of the "select service hotels," or properties that no longer had a restaurant on the premises and were cheaper to build, Mount added.

A simple continental breakfast included in the room rate proved to be attractive to guests at these establishments, so the hotels began to expand their offerings to differentiate themselves from the competition.

"It's a little bit of an arms race," STR Global's Freitag said.

"If you look across the street and you see somebody offering bagels and a toaster, you feel like, 'Oh, now I've got to have eggs.' And then they look at your eggs and say, 'Now I've got to have an omelet.' Sooner or later, you end up with a large amount of offerings."

Breakfast is also a relatively cheap way for a hotel to differentiate itself, Freitag said. Offering omelets is much less expensive than promising guests flat screen TVs or premium mattresses in their rooms.

But don't expect free breakfasts to get even more elaborate -- at least at the more moderately priced chains.

"If you go any further, then all of a sudden you're into being a restaurant, and that just takes on a whole new dimension as far as labor and cost. So as far as the breakfast wars, we've really kind of reached where we can go," Smith said.

What's your favorite complimentary hotel breakfast? Let us know in the comment section below.