(CNN) -- To say I learn new things about London, England, every day is not an understatement.

I am the chief cameraman in CNN's London bureau and have lived in London since 1996. I traveled so much for CNN the first few years that I only had a passing knowledge of the city.

Then my wife and I had kids, so my knowledge became limited to mostly child-friendly pursuits.

But as Samuel Johnson wrote, "You find no man, at all intellectual, who is willing to leave London. No, sir, when a man is tired of London, he is tired of life; for there is in London all that life can afford."

So I think most people learn something new nearly every day. CNN.com asked me these questions about my adopted hometown:

It used to be a number of different places, but the London Eye is now the best place to go, hands down. If you can, time it so you are on it as the sun is near to setting, because you just might catch the beautiful orange sunset hitting the clouds, if the weather is just right.

My wife, her family and I recently went to Petrus, one of Gordon Ramsay's restaurants, and it was excellent. I would definitely try that one again.

Probably Trafalgar Square. Not only can you watch people, but also there are fantastic views 360 degrees around you!

What is your favorite neighborhood? Why?

Chiswick. It is very green, very suburban, it has a lot of nice restaurants on the high street and like lots of London, you often see celebrities strolling down the street. Colin Firth and the artist Peter Blake, who designed the Beatles' Sgt. Pepper album cover, are two I have seen most recently.

If I were to travel beyond my own area, Hampstead Heath and Greenwich are beautiful and green with lots of nice restaurants around.

London is so eclectic and because vast amounts of the people you will see are from somewhere else, it is hard to be tagged as a tourist. That said, if you are wearing an "I (heart) London" sweatshirt, a backpack or a baseball cap with a still camera in your hand and are standing on the left-hand side of the escalator at a Tube station, you are DEFINITELY a tourist! So avoid all those things and you will probably do well. 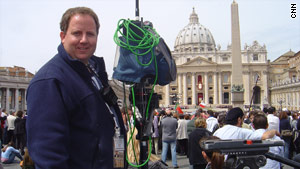 CNN's Todd Baxter at the Vatican just before Pope Benedict XVI was presented for the first time.

Home, on my couch. I travel too much for anywhere else to be relaxing. Other than that, maybe one of the many, many parks around London with my family.

You can't do London in a few hours. If you have truly never been here before, the best thing to do is to get on a hop-on, hop-off open-top double-decker tourist bus to see the highlights and stop at what strikes your fancy.

I would say walking from Trafalgar Square down Whitehall past Downing Street to the Houses of Parliament and then Westminster Abbey is a must. But the Tower of London is worth your time as well. You should spend all your time outside, but if it is raining, the museums in London are superior, generally free and a great way to pass several hours.

Probably the biggest tourist trap is Madame Tussauds. It is fun to be photographed with the wax figures, but once you have been there one time, that is usually enough, at least for me. But it is worth going to once. London Dungeon is the other tourist place I am not sure I need to ever visit again. Fun and frightening once, but not necessary beyond that.

That is very hard to say, as everyone wants something different. I recently took a friend visiting around and she was looking for London snow globes. We found some in a souvenir shop after a long search.

Pont Street in Knightsbridge at a restaurant named Drones. It has since closed, but I lived over it for a few months when I first got to London. It is where I proposed to my wife, and that would be my most memorable meal.

Probably one of the oddly named dishes like Toad in the Hole (sausages baked in Yorkshire pudding batter) or Spotted Dick (a classic English pudding) would be most appropriate, if only to take pictures of it and tell your friends back home. Barring that, I would suggest the British comfort food of mash and pie and a pint. The food in London is great, but there are some bad places to go, so don't let one bad meal make you slur the whole city.