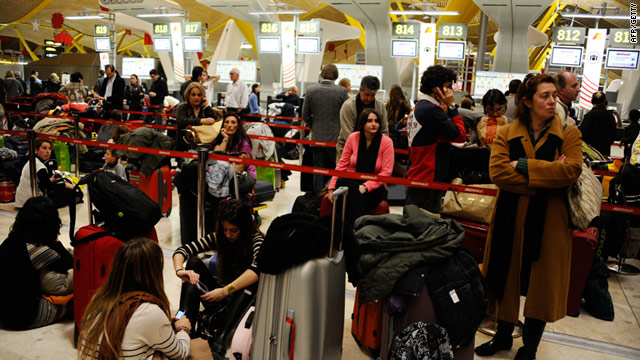 Madrid, Spain (CNN) -- Spain reopened its airspace Saturday after it was shut down due to a strike by air traffic controllers, the country's airport authority said.

The nation's AENA airport authority said airspace was reopened after the majority of striking air traffic controllers returned to work Saturday afternoon and that conditions had returned to "normal."

A spokeswoman for the authority said that there was an adequate number of controllers at Madrid's airport Saturday afternoon to handle 30 takeoffs and landings per hour, about a third the usual traffic.

Earlier Saturday, the Spanish government declared a state of alert allowing authorities to prosecute air traffic controllers who refuse to work, officials said, after the workers declared a surprise strike Friday during one of the nation's busiest holiday weekends.

The declaration, published in the government's official bulletin, decrees that air traffic controllers who do not report to work could be charged with the crime of disobedience and face prison time, Deputy Prime Minister Alfredo Perez Rubalcaba told reporters.

Spain's constitution says such a state of alert can last for as long as 15 days, he said.

The declaration comes after a surprise strike from air traffic controllers paralyzed the nation's airports during a busy travel weekend.

AENA, the airport authority, recommended passengers not go to the airport and instead get in touch with their airlines.

Iberia, Spanair, KLM, Air France, easyJet and Ryanair canceled all flights to and from Spain at least through Sunday morning, and it was unclear how the announcement of reopened airspace would affect those plans.

Ryanair and easyJet said their cancellations also applied to flights to Portugal.

All flights from Paris into Spain were canceled Saturday, the Paris airport authority said.

Some passengers at the Madrid airport were leaving to board buses for domestic locations, trips that could take several hours. Authorities also added extra trains. and private bus companies added seats to try to alleviate the problem.

Air traffic controllers went on strike Friday, stranding tens of thousands of travelers and prompting the Spanish government to bring in the military to control the air space.

Saturday's declaration of a state of alert mobilizes the air traffic controllers as if in a military situation, a spokeswoman for the deputy prime minister said. Military officers at the control towers will tell the controllers that they have been mobilized, and if they decline to work, they can face charges of disobedience that carry the possibility of jail time.

Many of the stranded passengers described being stuck on planes on airport tarmacs. They included families with young children trying to set off on a vacation over the long holiday that continues in Spain through next Wednesday.

Auditor Juan Infante said the strike left him stuck in the Madrid airport Saturday morning when he should be on a business trip to Abu Dhabi, United Arab Emirates. He said he was angry with air traffic controllers for taking advantage of a busy travel weekend to make a point.

"They waited for these holidays that we have in Spain to get the strike going. They planned all of this," he said.

The months-long dispute between the government and the air traffic controllers over conditions and pay reached a climax around 5 p.m. Friday when controllers at airports in Madrid and Spain's Balearic Islands in the Mediterranean walked off en masse.

Just a few remained to guide some remaining planes in the air toward safe landings, officials said.

AENA estimated as many as 250,000 people might be affected, including those at airports and those waiting to go on flights that would be delayed or canceled.

Earlier Friday, the prime minister's Cabinet approved a measure regulating the controllers' shifts and work conditions. The new rules also allowed the government to put the military in control of air space in case of a wildcat air controller strike.

The government apologized for the inconvenience to travelers in repeated statements and added extra trains from the state-run railway, but not enough to handle everyone stranded at airports.

AENA President Juan Ignacio Lema apologized to Spaniards for the disruptions, calling the strike an "irresponsible decision" that has "grave consequences" across the country.

Spain is undergoing austerity reforms in order to avoid a bail-out package.

Looking for way to cut costs, the leftist government of Jose Luis Rodriguez Zapatero is finding itself in the position of fighting against the air traffic control unions who oppose some of these measures, including one to allow private capital for the first time to take minority stake in airport management starting at Madrid and Barcelona airports.

Friday's decree sought to tighten control over controllers work conditions and schedules. The controllers are seen as well-paid, with great flexibility in taking time off.