Air rage: Is reclining your seat a right? 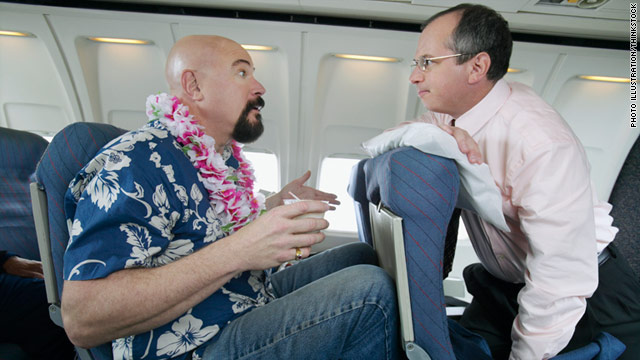 Reclining seats on planes can cause friction between passengers who say comfort is at stake.
STORY HIGHLIGHTS
RELATED TOPICS

(CNN) -- The passenger in seat 9C was ready for a nap after takeoff, so he pushed the button on his armrest and reclined -- straight into the path of someone who apparently wouldn't have it.

The incident adds fuel to a debate that seems to divide air travelers into two camps: those who say that reclining their seat on a plane is a right that comes when they buy a ticket and those who believe it's a privilege that shouldn't be abused.

As Brian Dougal leaned back on the Denver-bound flight late last month, he felt someone bump his seat, according to a criminal complaint filed in the U.S. District Court of Colorado.

"Are you serious? My knees are up against the seat," said the man behind him, identified as Tomislav Zelenovic, according to the complaint.

Dougal suggested that Zelenovic also recline, slide into an empty seat next to him or move his legs to the side. Dougal told the man in 10C that he paid for his seat and was going to recline it.

Zelenovic then shook the back of Dougal's seat and grabbed his right ear, pulling it back and down with enough force to knock Dougal's glasses off his face, according to the complaint.

When the plane landed in Denver, police officers escorted Zelenovic off the flight. He was charged with assault "by striking, beating, or wounding on an aircraft" and has pleaded not guilty. Zelenovic's attorney declined to comment on the case for this article.

Few arguments over reclining seats go that far, but as cabins grow more crowded and cramped, it's easy to find eye rolling, seething frustration or downright resistance coming from behind travelers who choose to push the armrest button.

Steve Collins, an Australian broadcaster who runs the blog Grumpy's Getaway Guide, argues that he shouldn't have to put up with passengers who lean back and invade his personal space.

"I don't recline my seat, primarily because I have respect for the person behind me, and I simply hate it when the person in front of me shifts their seat as far back as it will go," Collins recently vented in a blog entry titled "Ban the reclining seat on planes."

He may be a fan of low-budget carrier Spirit Airlines, which made headlines this spring when it announced that it was installing "pre-reclined" seats on some of its planes as a space- and cost-saving measure.

The seats permanently recline about three inches, but their occupants can't lean back more (or sit up more upright, if they wish.)

Fliers with long legs often find the reclining seat particularly terrifying. In a recent CNN.com article about the plight of tall travelers, some said that they ask passengers in front of them to be considerate and not lean back. When someone still insists, some just push back.

But many air travelers say that reclining is a right that comes when you purchase your seat.

"I regard the invasion of the person's space sitting behind me as an unfortunate, but easily tolerated, side-effect of my attempt to achieve a modicum of comfort while flying," wrote travel guru Arthur Frommer in his blog this year.

Frequent flier Ben Schlappig says he doesn't lean back in coach on daytime flights as a courtesy to others, but he doesn't expect anyone to return the favor.

"There's a reason the button is on your seat, and certainly everyone (except possibly the person in the last row) has the same 'right' in that regard," Schlappig recently wrote in his blog, One Mile At a Time.

So, is reclining your seat on a plane a privilege or a right?

"It's not a right; it's not a privilege; it's a function of the seat that you purchase," Post said. She personally wishes airlines would stop allowing the seats to recline but said she understands that part of flying is the possibility of sitting behind someone who puts their seat back.

"The courteous person will choose to not recline their seat for the entire duration of the flight. ... [But] I do think that the person who, unfortunately, has the seat coming back into their lap has to get over the fact that that's just the reality of the situation."

If you want to recline your seat, there is no obligation to turn around and assess whether the person behind you would be cramped, Post said.

If you're the passenger who feels uncomfortable when someone in front of you puts their seat back, you can ask whether they plan on being reclined for the whole flight, in which case you might start looking for a different seat, she advised.

A little planning might help, too: Before booking your flight, consult the charts on SeatGuru.com, which point out which seats do not recline. If you can book a spot behind them, you're set. If not, be prepared for someone who might lean back.

"It's one of those things where the airlines have put us into an uncomfortable position, and that's it. We have to live with it," Post said.

What's your take on reclining seats? Let us know in the comment section below.