Survey: White House, like a lot of U.S. real estate, lost value in '09 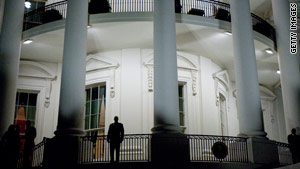 Designed by an Irish architect and built in 1792, the White House now stands at 55,000 square feet, on 18 acres.
STORY HIGHLIGHTS

(CNN) -- It seems even the White House isn't immune to the nationwide housing slump.

In the past year, the estimated value of the 132-room mansion on 1600 Pennsylvania Avenue dropped 5.1 percent -- from $308 million to $292.5 million, according to the real estate Web site Zillow.

The drop is in step with national trends. Homes across the country fell about 5 percent in price in 2009, said Zillow, which tracks real estate values, based on public records.

But the news wasn't all grim for the White House in 2009, just as it wasn't for the rest of America.

A year earlier, the White House lost even more of its estimated value -- almost $24 million, a 7.2 percent drop. During the same period, home values in the United States plummeted 11.9 percent on average.

It has 16 bedrooms, 35 bathrooms, three kitchens, three elevators, 28 fireplaces and an underground bunker.

In a December survey in which Zillow asked more than 2,000 Americans whom they'd most like to share a fence with, 14 percent named the Obamas.

The worst neighbors, according to the survey: Nadya Suleman, the California woman who gave birth to octuplets in January 2009, followed closely by reality-television stars Jon and Kate Gosselin.