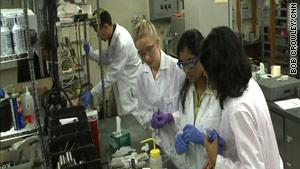 At the Massachusetts Institute of Technology, work is being done on a revolutionary liquid battery.

Washington (CNN) -- Government researchers and officials are hoping to use a relatively small amount of stimulus dollars to help find new ways for the nation to produce, consume and store energy.

The Advanced Research Projects Agency-Energy, part of the Energy Department, was conceived during the George W. Bush administration but only got its first funding in the stimulus bill -- to the tune of $400 million.

Agency director Arun Majumdar says that the nation lags in energy security and that his agency is key to helping the country address the problem aggressively. He aims to invest early in ventures that he says could deliver huge gains if they pan out.

He calls it investing in "American pioneers."

"Invest in high-risk, high-payoff R&D to get innovations from the lab into the market," Majumdar said.

So far, ARPA-E has committed to 37 projects worth $151 million after receiving more than 3,000 applications in the areas of renewable power, new technologies and efficiency. The average investment is about $4 million.

Other projects include one that would split water into hydrogen and oxygen for solar fuel; research into a technology that would use silicon wafers to dramatically cut the cost of installing solar power; and installing magnetic materials that would decrease the weight and increase the efficiency of motors for hybrid and electric vehicles.

After getting more than 500 applications for its second round of $100 million in grants, program directors are deciding which ones will make the cut.

While agency officials hope all of the initiatives they fund will become commercially profitable, they acknowledge the chances of that are very remote.

"Let's say a few of them are successful. They will be game-changing. They'll change the landscape of the energy field -- not just in our country, but globally," said Majumdar, a former associate director at the Lawrence Berkeley National Laboratory and a former professor at the University of California-Berkeley.

He also believes these investments will help spur innovation and market success that will create a large number of jobs down the road -- ones that, with the Department of Energy's help, will stay in the U.S.

"I think this is just the kind of research the government should be getting behind because it is higher-risk, it has the potential for very high payoffs," said Michael Raab, president of Agrivida, the company doing the biofuels plant project.

"But, particularly in this kind of an economic climate, it is hard to find investors that are willing to invest in high-risk opportunities. And so the government can fund this research and get it to a point where others will invest in it and really push it forward into the marketplace."

Tom Schulz, co-founder of BioCee, which does research in solar fuels, said the program will produce the next "Energy Google."

"We don't know which company of the funded projects it will be, and we don't know when it will 'tip.' However, most of the projects will create only a few (but very qualified) jobs over the next two years," Schulz said. "The real question is how many jobs will be created and saved in 5 to 10 years."

Some critics say, however, that the government should not be investing in particular projects with the aim of getting them to the marketplace.

Book supports government-sponsored scientific research but not having the government trying to help determine which projects should get a financial boost toward the marketplace.

"Turning science projects that nobody wants into products that no one can afford to buy is a terrible idea," he said.

To help make the best decisions possible, ARPA-E has recruited staff from the private sector, including some with hedge fund experience, and also consults with experts in particular scientific fields.

ARPA-E is based on the concept of the Defense Advanced Research Projects Agency, or DARPA, which was created in 1958 to push technological research and development after the Soviet Union launched its Sputnik satellite before the U.S. could get off the ground. Among DARPA's accomplishments is helping to spur the creation of the Internet.

CNN's Francesca Johnson and Bob Crowley contributed to this report.