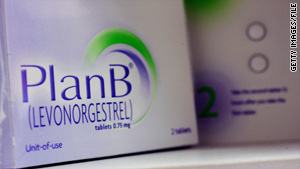 Plan B is available without prescription in the United States.
STORY HIGHLIGHTS
RELATED TOPICS

Washington (CNN) -- All U.S. military health facilities around the world will now carry the emergency contraception pill known as Plan B One-Step, according to a new Department of Defense policy.

The decision to carry the pill, often referred to as the morning-after pill, was based on a recommendation by the Pentagon's Pharmacy and Therapeutics Committee, an advisory panel made up of medical professionals from the military services, Pentagon officials said Friday.

Many military hospitals already carry the pill, but the new action means it will become a standard part of every medical facility's stock of drugs, including those on bases in Iraq and Afghanistan, the officials said.

The panel's recommendation was approved by the Pentagon's acting assistant secretary of defense for health affairs, Allen Middleton, on Wednesday, the officials said.

The decision to make levonorgestrel, the generic name for Plan B One-Step, available to all Department of Defense health installations was based on a desire for uniformity, according to Pentagon spokesman Col. David Lapan.

In response to reporter queries, Lapan said the decision was not prompted by any direction from the administration or the secretary of defense. The committee sees this as a clinical decision, and this drug is available at virtually all the hospitals and pharmacies already, he said.

According to the minutes of the Pharmacy and Therapeutics Committee meeting in November, in which the panel members reviewed the request to approve Plan B One-Step, the committee had received a request to reconsider the addition of levonorgestrel -- renewing a request from May 2006 to add it as a core drug in Defense Department health facilities. It was not clear where the request came from, Lapan said.

A similar recommendation was made by the panel in 2002 but the military did not create a policy at the time, according to the Washington Post.

The decision comes just two months after a commander in Iraq attempted to enforce a clause in his code of conduct that would have made getting pregnant while deployed there -- or being responsible for getting a servicewoman pregnant -- a punishable offense. Currently policy is that any woman who learns she is pregnant while in the war zone is immediately removed and sent back to the United States.

The commander argued that when a woman gets pregnant and has to leave, she places a burden on the rest of the troops. After much controversy regarding the policy, the rule was rescinded.

The pill has been controversial in the United States. Critics consider its availability a promotion of sex without consequences.

Defense Department medical facilities are required to carry hundreds of drugs, known as "core formularies." Hospital commanders have the discretion to carry other drugs as needed but must carry all core formularies, according to Pentagon spokesman Bryan Whitman. Levonorgestrel will be considered a core formulary and will be carried in all the department's health facilities.

Levonorgestrel does not allow a fertilized egg to embed into the uterus and start a pregnancy. It is available without prescription in the United States.

The Department of Defense also carries other contraception options such as condoms and birth control pills.