Coyotes looking to settle down in New York City? 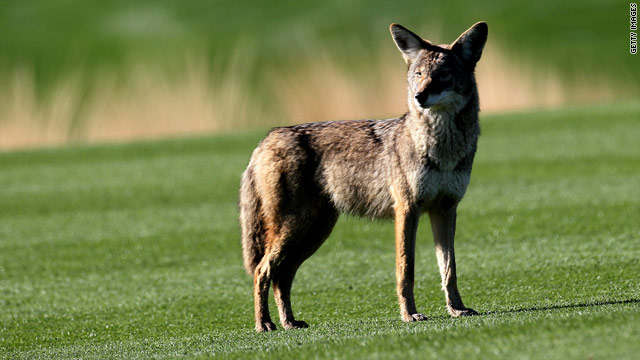 This coyote was photographed out West, but they are becoming more frequently spotted in Manhattan of all places.
STORY HIGHLIGHTS

New York (CNN) -- At least three times in recent weeks, they've been spotted in various parts of Manhattan, from the streets of Harlem to Central Park to Columbia University.

The furry foragers most often associated with wind-swept prairies and lonely woodlands are rare but not unheard of in Manhattan, according to Adrian Benepe, New York City parks commissioner .

Most recently, a frightened witness called 911 in the early morning hours of Sunday to report seeing something that looked like a coyote on Columbia University's Morningside campus. Officers responded and confirmed that it was, indeed, a coyote.

Students were sent an e-mail Sunday afternoon reporting that "three animals identified as coyotes" were on Columbia's campus. Police believe the animals left the campus as quietly as they had come.

In late January, a coyote was caught and tranquilized after a short adventure through Harlem. Vicki Karp, director of public affairs at the Department of Parks and Recreation, said that coyote was later released in Pelham Park in the Bronx.

Another coyote was sighted just this past Thursday in Central Park, when an amateur photographer snapped some pictures and posted them on the Internet.

Looking at the Manhattan landscape, it's not hard to see where they could live.
--Biologist Gordon Batcheller
RELATED TOPICS

Benepe said that the coyote in Harlem was the third coyote sighting in 10 years, making the Columbia coyotes the fifth sighting.

Gordon Batcheller, a wildlife biologist with the state Department of Environmental Conservatism headquarters in Albany, explained that it's not so surprising to see coyotes in the big city.

"Looking at the Manhattan landscape, it's not hard to see where they could live. They are very adaptable to a variety of conditions."

Batcheller said a thriving population of coyotes in suburban Westchester County and the northern part of New York City could naturally follow train tracks, parks, river banks and highways down into Manhattan.

January and February are characteristic of coyote breeding and mating, leading to natural exploratory behavior as coyotes look for a safe place to settle down, said Batcheller.

Batcheller advised that in order for New Yorkers to remain safe they should avoid feeding the coyotes, and if approached by a coyote, they should make noise and throw sticks to frighten the animal away.

However, he also explained that in an urban environment the animals would most likely react to human beings with curiosity rather than aggression.