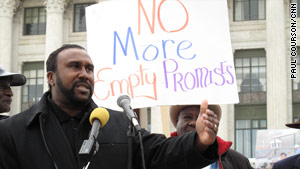 John Boyd, founder of the black farmers group, participates in a rally Monday outside the U.S. Department of Agriculture.
STORY HIGHLIGHTS
RELATED TOPICS

Washington (CNN) -- The head of the National Black Farmers Association said Thursday the U.S. government has agreed to pay qualified farmers $50,000 each to settle claims of racial bias.

U.S. Agriculture Secretary Tom Vilsack said those farmers may also pursue a claim for actual damages from the bias, and potentially receive up to $250,000.

The settlement, which covers as many as 80,000 black farmers at a price of more than $1 billion, still needs to be funded by Congress, both sides acknowledged Thursday.

The 2010 farm bill, still pending in Congress, includes more than $1 billion to cover the compensation claims.

In a written statement Thursday, President Obama said his administration "is dedicated to ensuring that federal agencies treat all our citizens fairly, and the settlement in the Pigford case reflects that commitment."

The Pigford case was decided in favor of black farmers by a federal judge's ruling in 1999.

In a conference telephone call with reporters, Vilsack said racial bias unquestionably took place in his agency over many years.

He gave an example of two farmers, one white, one black, applying for a farm loan with an office of the USDA.

The white farmer's application "was processed rapidly, it was approved, and resources were quickly available to enable him to put a crop in," Vilsack said. The application from the black farmer "was denied without due diligence on whether he had the capacity to repay, or else he or she was strung out over such a long period of time that they couldn't put in a crop," Vilsack said.

The result, Vilsack said, was that "in some cases they lost the farm."

The rallies wrapped up Monday as a small group of activists gathered outside the Agriculture Department in Washington. Boyd and other demonstrators expressed frustration that Congress has yet to approve a budget that would pay for the 1999 class action settlement in the case.

Part of the reason lawmakers were reluctant in the past to provide funding, Vilsack said, was their concern that no agreement -- such as the one announced Thursday -- was on the table.

He described a two-track process in which black farmers could receive a flat $50,000 payout with minimal proof linking discrimination to the denial of federal farm support.

A more rigorous system of proof could establish actual damages and yield a potential payout up to $250,000, depending on how many other claimants also prove their cases to draw from the funding provided by Congress.

Boyd acknowledged "not everyone will qualify" for the payments.

"It's still a victory that their claims will be reviewed as a result of this agreement, which at least gives them a chance and keeps this out of courts, where no one gets any money," he said.

Vilsack, noting the farm bill is still awaiting approval, said he didn't think "anybody in Congress doubts there's a responsibility to settle." However, if no funding exists by the end of March, farmers can walk away from the agreement if they desire, he said.

Boyd said he will meet Friday with the staffs of House Speaker Nancy Pelosi and Senate Majority Leader Harry Reid to affirm that the agreement should be funded.