Texas plane crash pilot: 'I have just had enough' 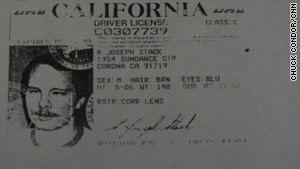 (CNN) -- A portrait is beginning to emerge of Joseph Andrew Stack, the man officials believe set his house on fire and then intentionally crashed his small aircraft into an office building in Austin, Texas.

Stack, 53, owns a Piper Cherokee PA-28, according to aviation records, and federal officials believe that is the plane that crashed into the building Thursday.

Authorities said the remains of two people were found in the building after the crash. They were not immediately identified.

A message on a software company Web site registered to Stack appears to be a suicide note.

"If you're reading this, you're no doubt asking yourself, 'Why did this have to happen?' " the message said. "The simple truth is that it is complicated and has been coming for a long time."

At the FBI's request, the letter was later removed from the site.

As recently as February 7, the Web site was for Embedded Art, which appears to be a software company founded by Stack.

"Embedded Art is a small independent software house, specializing in process control and automation," a cached version of the Web site said. "In its current form it represents the culmination of 20 years of experience in the software development consulting business. Founded by Joe Stack in 1983 (under the name of Prowess Engineering) in Southern California, the company thrived for 15 years until shifting focus to the Sacramento area to take advantage of growth in the Silicon Valley."

The Web site changed over on February 16, indicating Stack had possibly been planning to post the note for at least two days. The document had been revised 27 times since the 16th, according to the site's page information, and was finalized at 1:42 a.m. ET -- about eight hours before he is believed to have taken his plane from the airport.

Video: Who is Joseph Stack?

In the long message, the writer rails against the government and, particularly, the Internal Revenue Service.

The building into which the airplane crashed is a federal IRS center with 199 employees.

"I saw it written once that the definition of insanity is repeating the same process over and over and expecting the outcome to suddenly be different," the online message said. "I am finally ready to stop this insanity. Well, Mr. Big Brother IRS man, let's try something different; take my pound of flesh and sleep well."

In the letter, the writer, who signs as Joe Stack, said he feels some frustration in writing, "given my gross inability to gracefully articulate my thoughts in light of the storm raging in my head."

Details in the letter coincide with details of Stack's life, such as his move from California to Texas in 2004. Once in Austin, he bought a $230,000 home in a leafy subdivision, the same home that he allegedly set on fire before piloting the plane into the building.

Photos from the scene of the fire showed a fire truck parked in front of a large brick house, flames and plumes of thick smoke rising into the sky.

Stack's wife is listed as a teaching assistant at the University of Texas-Austin.

The examples of Stack's apparent frustration in the note coincide with financial troubles his companies had.

The California Franchise Tax Board said Stack's Software Systems Service Corporation license was suspended June 1, 2004, for not paying taxes in 1996 and 2002, CNN affiliate KCRA reported. And another of Stack's companies in California -- known as Prowess Engineering, which became Embedded Art -- had its license suspended November 1, 2000, for a failure to file a 1994 tax return, KCRA reported.

Thursday's incident left those who knew Stack scratching their heads.

"I can't believe it's the same person," said Ric Furley, an Austin musician who played in a band with Stack for a period more than two years ago.

Stack played bass, the accordion and sang for the band, according to the band's Web site.

Stack was very musical, and conversations with his bandmates typically revolved around music, not grievances he may have had.

"He was very easygoing," Furley said, adding that he guessed it was insanity that led Stack to his alleged suicide mission. "What else could it be?"

In the online message, the writer noted how during past times of crisis, like during the Great Depression, some of the wealthy who lost everything were known to have killed themselves.

"Now, when the wealthy f--- up, the poor get to die for the mistakes ... isn't that a clever, tidy solution," the letter said.

"Nothing changes unless there is a body count," it said. "I choose to not keep looking over my shoulder at 'Big Brother' while he strips my carcass, I choose not to ignore what is going on all around me, I choose not to pretend that business as usual won't continue; I have just had enough."

He plainly stated his conclusion: "Sadly, though I spent my entire life trying to believe it wasn't so, but violence not only is the answer, it is the only answer."