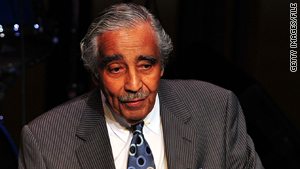 (CNN) -- U.S. Rep. Charles Rangel: The congressman, a New York Democrat, will be formally admonished Friday by the House's ethics committee for violating rules on receiving gifts, the panel said. The issue centers on who paid for his and other Congressional Black Caucus members' travel to the Caribbean in 2007 and 2008.

This year marks the congressman's 20th term in the House of Representatives. Rangel, born in 1930, is first African-American to head the powerful House Ways and Means Committee.

In his autobiography, "And I Haven't Had a Bad Day Since: From the Streets of Harlem to the Halls of Congress," Rangel said he was a high school dropout who was able to transform his life with help from the GI Bill of Rights after serving in the Korean War. He received an undergraduate degree from New York University and a law degree from St. John's University School of Law.

For Rangel, Friday's public admonishment follows a string of entanglements with the ethics committee over several issues, including failure to report assets and pay taxes. In 2008, House Democrats defeated a GOP resolution to censure Rangel over rules he allegedly broke involving four rent-controlled apartments in New York.

On the House floor, the lawmaker said at the time, "There's no one in this House that's more thick-skinned than I am in terms of playing politics, but playing with someone's reputation, especially someone that has felt so honored to serve in this House -- I really think goes a step beyond that."

CNN: Rangel to be admonished by ethics committee

Maya Lin: President Obama awarded the 2009 National Medal of Arts and National Humanities Medal to 20 honorees in the White House East Room on Thursday. Lin was honored "for her profound work as an architect, artist, and environmentalist. Her vision for the National Vietnam Veterans Memorial emblemizes her deep understanding of the ways in which we respond to the world around us."

While Lin's design is celebrated today as one of the most emotionally powerful war memorials in modern art, 30 years ago her entry in a nationwide competition caused heated controversy.

She was 21 and a Yale University architecture student. Some 1,500 artists submitted designs, but a panel of judges selected her V-shaped black, stone wall bearing the names of the 58,261 men and women who died or were declared missing in the Vietnam War. But some vocal veterans at the time protested Lin's design, calling it a "black gash of shame."

Today, the Vietnam Veterans Memorial Center estimates that 4.4 million people visit the wall on the National Mall in Washington each year.

The Wall-USA: About the memorial

Karyn Langhorne Folan: "Black women are in market failure," says writer Folan. "The solution is to find a new market for your commodity. And in this case, we are the commodity and the new market is men of other races."

In a Washington Post profile, Folan says she's promoting interracial romance as a reasonable solution to the scarcity of available black men. "Consider your options," she says. Her advice: "Forget about the brothers calling you a sellout. Get over those old images of slavery and stop blaming every white man for sins perpetrated by others."

Folan is the author of the new book "Don't Bring Home a White Boy: And Other Notions That Keep Black Women From Dating Out."

She reports on her Web site that she moved around the country as a child -- the daughter of military parents. She went to Harvard Law School, worked at a law firm in Atlanta, Georgia, wrote two unpublished novels, did some lobbying in Washington and kept writing.

Wayne Newton: Nevada sheriff's deputies descended Thursday on Newton's 38-acre ranch with movers in tow to carry out a debt-collection action, but were rebuffed, officials said. The deputies from the department's civil process service were turned away from the property and returned to the Clark County Courthouse in Las Vegas.

The entertainer known as "Mr. Las Vegas" was facing debt collection of more than $455,000 from a breached contract with a man identified in court documents as Monty Ward. Also, Bruton Smith sued Newton this year in an attempt to get repayment on a $3.35 million loan. Newton's home, which he had put up as collateral, could be at risk, court records show.

According to a profile at cmt.com, Newton, born in Virginia in 1942, began his career performing rockabilly with his brother Jerry on TV and in Las Vegas. Bobby Darin mentored Newton, and in 1963, he released his signature hit, "Danke Schoen." Newton was once the highest-paid nightclub performer, earning $1 million a month.

Michael Denson: "Walking the last mile with death row inmates, Michael Denson lives in a state where 87 percent of the residents support the death penalty." So begins Michelle Bearden's remarkable portrait of Denson at the uscatholic.org Web site.

The Frisco, Texas, rancher founded the Catholic Death Row Ministry two decades ago, and today he finds himself spending less time with his cattle and more hours with inmates at maximum-security prisons.

He told Bearden, "The general attitude is 'Let's kill them, and let's kill them as quick as we can.' I don't judge others for holding that opinion, but it doesn't work for me."

Bearden reports that Denson's mother frequently wrote letters to inmates who needed pen pals. When he was 8, he asked his mother to write a letter -- on his behalf -- to convicted murderer Gary Gilmore, who killed two men in Utah and who was later executed.

"Then the FBI called my mom and told her that her young son wrote this letter to Gilmore, saying he wanted the inmate to meet his dad when he went to heaven," Denson said. "My dad died when I was 5, and since it seemed certain that this man was going to die, too, I was hoping he'd look for my dad."

In addition to the visits, Denson writes his own letters to prisoners and has witnessed four executions at the request of inmates or family members, according to Bearden. He is often asked how he would feel if someone murdered his child. "I would pray that God would give me the grace to forgive," Denson told Bearden. "No matter what, I still believe that only he has the right to take a life."