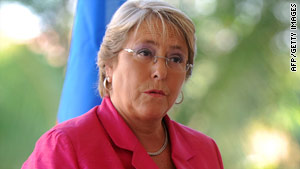 (CNN) -- Michelle Bachelet: The president of Chile was born in Santiago in 1951. Her Web biography tells a remarkable story. The mother of three children is trained as a doctor, with graduate studies in military sciences.

Her father, Alberto Bachelet, was a general in the Chilean air force. When Gen. Augusto Pinochet led a coup against Salvador Allende's government on September 11, 1973, her father was arrested that same day and later died in prison, "having suffered a heart attack as a result of the strain on his body from the torture to which he was submitted."

In January 1975, two agents from Pinochet's secret police arrested Bachelet and her mother. They were interrogated and tortured. Once freed, Bachelet studied medicine in Berlin, and returned to Chile in 1979. She was named minister of health in President Ricardo Lagos' administration in 2000 and two years later was appointed minister of defense, the first woman both in Chile and in Latin America to hold such a position.

After a runoff election in January 2006, Bachelet became the first woman in Chilean history to hold her country's highest office. Her successor, President-elect Sebastion Piñera, is scheduled to be sworn in on March 11.

Jim Bunning: The Senate adjourned Friday without approving extensions of cash and health insurance benefits for the unemployed after a lone senator -- retiring Republican Jim Bunning of Kentucky -- blocked swift passage due to his insistence that Congress first pay for the $10 billion package.

Bunning led a spirited Senate debate with Democrats over the issue. He said he doesn't oppose extending the programs -- he just doesn't want to add to the deficit. Two Democratic aides on the Senate floor Thursday night said Bunning muttered "tough s---" as Sen. Jeff Merkley, D-Oregon, criticized Bunning's stance on the package.

Bunning maintained on Friday that if all senators could agree that the benefits are so important, then they should find a way to pay for them. "If we can't find $10 billion somewhere for a bill that everybody in this body supports, we will never pay for anything," he said.

According to his Senate biography, Bunning began his second Senate term in 2004, after serving 12 years in the House of Representatives. "As a youngster in Northern Kentucky, Bunning fell in love with baseball," reads his biography, "and even then he displayed a competitive spirit and a willingness to work hard. That combination carried him on to a highly successful 17-year career as a Major League Baseball player after his graduation from Xavier University with an economics degree." Bunning pitched primarily for the Detroit Tigers and Philadelphia Phillies and was selected to the Baseball Hall of Fame in 1996. After Cy Young, he was the second pitcher in history to achieve 1,000 strikeouts and 100 wins in both the American and National leagues.

Patty Skolnik: Malpractice survivors and family members from five states will hold their first meeting with White House staff on Monday, coordinated by the Center for Justice & Democracy, a meeting Skolnik says they have been requesting since 2003. Advocates are concerned that proposals to limit injured patients' rights are becoming a bargaining chip in the health care debate.

Skolnik, of Centennial, Colorado, will be at today's meeting. She told CNN on Sunday, "Lawmakers can't look at the consumer as the problem, saying that we are bringing frivolous lawsuits. This is not the patient's fault. The White House needs to bring the consumer into the conversation."

Skolnik said that in 2001, a surgeon misdiagnosed what was wrong with her son, Michael, and performed unnecessary brain surgery on him. She says the surgeon told her "he had done many of these surgeries, when he had only done one before. He went on a fishing expedition inside my son's brain."

This marked the beginning of a 32-month nightmare of more brain surgeries, infections, partial blindness, paralysis, and other problems, leading to total disability. Her son could not eat, speak, or move anything but his right hand. Nearly every day during this traumatic time, she says, "Michael used the only limb control he had to shape his fingers into a gun, and held them to his forehead, repeatedly throughout the day." He had the cognitive ability of a third-grader.

The Skolniks sued the doctor, and when Michael died in 2004, they settled out of court. After his death, Patty Skolnik founded an organization that, in 2009, became the Citizens for Patient Safety. On her Web site, she says, "You can suffer a great loss, but you have a choice as to how to handle it. Anger and grief has a place, but taking that and transforming it into a solution is the best healer and the best reward for everyone."

Julianna Smoot: The White House on Saturday announced that the Democratic Party fundraiser and North Carolina native had been named deputy assistant to the president and social secretary. Smoot replaced Desiree Rogers, who stepped down on Friday.

Rogers' office came under scrutiny after a couple who lacked an invitation were allowed into President Obama's first state dinner. In December, the White House was accused of stonewalling as Congress investigated the party-crasher security breach. At issue was whether the White House was protecting Rogers from testifying about how Tareq and Michaele Salahi were able to crash the dinner planned by Rogers' office.

In 2007, The Washington Post profiled Smoot, calling her "The $75 Million Woman," and reporting that, as Obama's finance director, "she helped transform a fledgling campaign into a fundraising machine. By the end of September [2007], the senator from Illinois had raised more money for his primary bid than any other candidate in either party -- more than $75 million."

Daniel Radcliffe: The actor, best known for his portrayal of wizard-in-training Harry Potter, has just taped a public service announcement for The Trevor Project, which operates a 24/7 crisis and suicide prevention hotline for lesbian, gay, bisexual, transgender and questioning youth.

"It's something I've always been quite passionate about," Radcliffe told MTV. "Because I grew up around gay men, it was always a natural thing to me. It was never something I ever gave a second thought to."

The Trevor Project was founded by the creators of the 1994 Academy Award-winning short film "Trevor," about a gay 13-year-old boy who attempts to take his life when he's rejected by friends because of his sexual orientation. Radcliffe told MTV that he didn't encounter the idea of homophobia until later in his academic career. "When I went to my second school, I heard terms like 'puff' and 'homo' getting thrown around. It never occurred to me that some people might have a problem with it."

The internationally known actor was born in 1989 in a London suburb. He has appeared in six Harry Potter movies, with two more on the way. Harry's highly anticipated first onscreen kiss -- a heterosexual one -- occurred in the fifth installment of the series, "Harry Potter and the Order of the Phoenix," released in 2007.