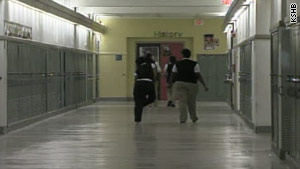 The Kansas City, Missouri, school board voted Wednesday to close 28 of the district's 61 schools.
STORY HIGHLIGHTS

(CNN) -- The superintendent of the Kansas City, Missouri, school district on Thursday defended a plan to shutter nearly half the district's schools.

"No one likes closing schools. It's hard. It's tough on families, and it's certainly tough on our community," superintendent John Covington said Thursday.

"Closing schools and making the remaining schools much stronger academically is unquestionably the right thing to do. We were operating far too many schools," he said.

He said the district was only using about 60 percent of the seats in its elementary schools, 40 percent in its middle schools and an even smaller percentage in its high schools.

After weeks of contentious debate and years of dwindling enrollment, a divided Kansas City Board of Education voted Wednesday night to approve what Covington calls the "right-size" plan.

The plan will close 29 education facilities, including 26 schools, according to the district.

"I have an 8-year-old and a 6-year-old that will be going to school with 12th graders. I find that very inappropriate. I don't feel my children will be safe," Deneicia Williams told CNN affiliate KSHB-TV.

Covington proposed the plan arguing that the financial future of the entire school district was at stake. The plan also cuts 700 jobs and saves $50 million to help reduce a burgeoning deficit.

School districts across America, hit hard by budget cuts, have been struggling to make ends meet.

They have had to make tough choices between closures, program cuts, bus route cancellations and layoffs of teachers and staff. Schools in at least 17 states have opted for four-day weeks.

"Closing schools is hard, and it is tough on the community," Covington said recently in remarks posted on the superintendent's Web site.

"Closing schools and making the remaining schools much stronger academically is unquestionably the right thing to do for kids," he said. "Keeping all of the schools open with too few children in them is draining the resources we need to improve the education of all students."

But four of the nine board members disagreed with Covington.

"I deserve the right to make a rational decision based on facts, and we were never given facts about student achievement," Cokethea Hill, who voted against the closings, told KSHB.

Some members of the public showed up Wednesday to air their last-minute appeals.

"What I'm asking you today to do is to give our children justice," said Ron Hunt, a community activist.

Others worried that school closures would lead to deterioration of communities and drive residents out of the district.

"The blighting of the urban core is scandalous and shameful," said Sharon Sanders Brooks.

Covington is slated to discuss the school closings at a news conference Thursday morning.