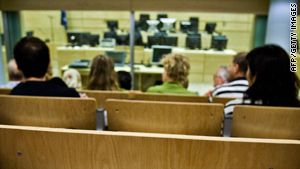 The International Criminal Court was established in 2002 to establish a permanent tribunal.
STORY HIGHLIGHTS
RELATED TOPICS

(CNN) -- The United States is "prepared to listen and to work with" the International Criminal Court, even though the Obama administration is not prepared to sign on to the treaty that established the court, a U.S. diplomat said Wednesday.

The U.S. government announced Tuesday it would support key war crimes prosecutions being pursued by the ICC. They included alleged crimes in four African nations, most notably the indictment of Sudanese President Omar al-Bashir.

"The United States is prepared to listen and to work with the ICC and go through requests that the prosecutor has. And we're not going to prejudge what those requests are," Stephen Rapp, U. S. Ambassador-At-Large For War Crimes, told CNN's Christiane Amanpour. "There may be obstacles under our law. But we're prepared to do what we can to bring justice to the victims in the Democratic Republic of Congo, in Uganda, and Sudan and in the Central African Republic."

The ICC was established in 2002 to establish a permanent tribunal that would replace the ad hoc bodies that had pressed war crimes charges in the former Yugoslavia, in Rwanda and in Sierra Leone. The United States, under President George W. Bush had spurned the court because of the concern that U.S. military personnel and diplomats might be charged by the court, and those concerns are shared by the current administration, Rapp said.

"Our concern was that a prosecutor who was not under any kind of accountability, who's elected for nine years, who doesn't answer to any kind of national system, could say, 'Well, over here, we've got someone who murdered 200,000 people. Over here, we have maybe some soldiers that came in to protect some of those people, and some folks died in collateral damage. We'll go ahead and prosecute both,'" Rapp said.

"We remain concerned that it might be possible for a prosecutor who's not accountable to anyone to target an American who's out doing the work that 3 million Americans are doing around the world today, protecting people from terror and atrocity," Rapp said.

Despite the concerns, the Obama administration is shifting U.S. policy on global justice by beginning to provide assistance to the ICC.

Rapp defended the court against charges that the ICC had an African-based bias, given that all of the cases brought so far by the ICC involved African nations.

"Three of these cases came from the African countries themselves. The other came from the (U.N.) Security Council," Rapp said. "Obviously, if similar crimes occur elsewhere, they need to be looked at."

Beatrice Le Fraper Du Hellen, special adviser to the prosecutor at the ICC, welcomed the announcement of U.S. support.

"We have our shopping list ready of requests for assistance from the American government," Le Fraper said. "The American government first has to lead on one particular issue: the arrest of sought war criminals. (Sudanese) President al-Bashir, Joseph Kony in Uganda, Bosco Ntaganda, the "Terminator in the Congo" -- all those people have arrest warrants against them, arrest warrants issued by the ICC judges, and they need to be arrested now."

Du Hellen called for the United States and the European powers to help isolate those charged of war crimes.

"In the case of Joseph Kony in Uganda, he is a militia leader surrounded by armed men. We need ... the operational support of countries like the U.S., to the DRC, to Uganda, to the Central African Republic, to assist them in mounting an operation to arrest him. They have the will -- so it's a totally legitimate operation, politically, legally -- but they need this kind of assistance. And the U.S. has to be the leader."

She also rejected the criticism from some quarters, that the ICC devoted undue attention to alleged crimes in Africa.

"We feel that we are intervening when the victims need the court to do something for them. And we feel very comfortable about it. If tomorrow there are crimes committed again in Africa against victims, we will intervene again in Africa. No doubt about that, Kenya is probably ... our next case. And all the Kenyans want (is for) us to come and help them to prevent violence ... so we're with them."

With the addition of Bangladesh on March 23, 111 countries have ratified the Treaty of Rome that established the ICC.