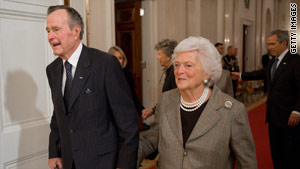 (CNN) -- Former first lady Barbara Bush was admitted Saturday to a hospital in Texas for routine tests, a spokeswoman said.

"Mrs Bush is in for some routine tests, not an emergency of any kind," said Jim Appleby, spokesman for former President George H.W. Bush.

The former first lady was taken to Methodist Hospital in Houston, Texas. She had not been feeling well for about a week, said Jean Becker, the chief of staff for Bush's husband.

Bush, 84, is expected to stay at the hospital for a day or two, Becker said. Details on the testing were not immediately available.

Becker, the chief of staff for former President George H.W. Bush, said her hospitalization is "not serious at all."

Last year, Bush underwent open-heart surgery during which doctors replaced her aortic valve with a biologic valve. She spent nine days in the hospital afterward.

Her recent hospitalization is "not related" to the surgery, Becker said.

In November 2008, Bush underwent surgery for a perforated ulcer.

CNN's Leslie Tripp and Ed Henry contributed to this report.