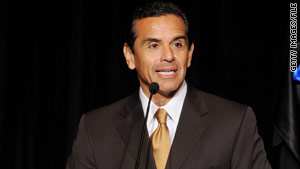 (CNN) -- The mayor of Los Angeles, California, called Tuesday for a plan to shut down all city services -- except for public safety and revenue-generating positions -- twice a week beginning Monday in an effort to solve the city's budget crisis.

"There are no easy decisions or simple ways to solve this budget crisis," Mayor Antonio Villaraigosa said. "But as the CEO of this great city, it is my responsibility to make these difficult, but necessary, decisions to steer the city out of this crisis and onto solid financial ground."

He said he was asking the city administrative officer to develop a plan to shut down the city for two days a week and calculate the money the city would save from the move.

The mayor's announcement comes a day after the Department of Water and Power said it will not be paying $73 million to the city's general fund.

The City Council rejected the increase last week. It had earlier approved a more modest increase, but the department's board voted for a higher one, which the council then rejected, The Los Angeles Times reported.

Without the $73.5 million, City Controller Wendy Greuel said, the city's general fund will be negative $10 million on May 5.

She called the situation "the most urgent fiscal crisis" in the city's recent history. She urged the mayor to transfer $90 million from the city's reserve funds so that she could pay city employees and the city's bills.