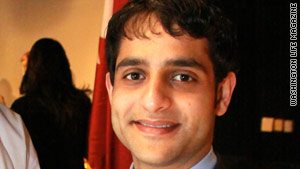 Washington (CNN) -- The Qatari diplomat involved in a security scare aboard a Colorado-bound flight will be sent home, two State Department officials said.

The State Department and Qatari government agreed that was the best way to handle the matter, the sources said.

Mohammed al-Madadi had been en route to Colorado for a series of consular visits, including a visit with a convicted terrorist at a federal facility, on Wednesday night, a spokeswoman for the Qatari Embassy said.

Two F-16 fighter jets escorted his flight to Denver after reports that he may have attempted to set a shoe on fire -- a report that may have stemmed from what one U.S. official called an "unfortunate comment" by the diplomat.

The U.S. official said that al-Madadi was in a lavatory for a long time and may have been smoking. Air marshals questioned him aboard the United Airlines plane, and the FBI spoke to him once the plane landed.

CNN's John King and Elise Labott contributed to this report.