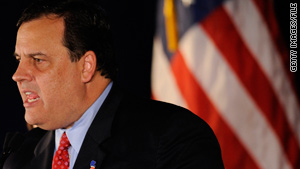 (CNN) -- A New Jersey teachers union is coming under fire after an internal memo included a veiled threat to Gov. Chris Christie.

The leaked memo, which was sent to union leaders in the New Jersey Education Association's Bergen County division, contains a closing paragraph written in the form of a prayer.

Bergen County Education Association President Joe Coppola said the memo was confidential and the line was intended as a joke.

"It was inappropriate, it was in bad taste, and it was definitely in poor judgment," Coppola said.

But Christie is not taking the letter lightly and had some strong words for the teachers union.

"We can have honest disagreements about policy," the governor said at a news conference Friday. "But I am sure there are teachers all across New Jersey when they learn about this today who are going to be ashamed."

He added, "I wonder what the children of New Jersey will think when the leadership of the teachers union is praying for their governor to die."

The incident comes as Christie and the New Jersey Education Association are entrenched in a bitter struggle over funding for New Jersey's school system.

Seeking to address an $11 billion budget deficit, Christie, a Republican who was elected in November, has proposed severe cuts to the state's education system, with teachers being hit especially hard.

"Language such as that has no place in civil discourse," she said. "Our ongoing discussion with Gov. Christie is centered on serious issues of significant importance to the state, and that must be the focus of all our conversation."