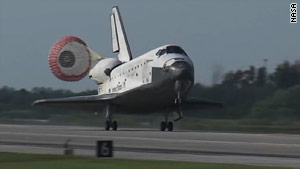 (CNN) -- After spending an extra day in orbit, the seven astronauts aboard the space shuttle Discovery landed Tuesday morning at Kennedy Space Center in Florida.

NASA officials had been closely monitoring weather conditions in the area of the space center, and passed on the first landing opportunity there.

Officials had been mulling a landing at Edwards Air Force Base in California. But earlier concerns about rain showers within 30 miles of the Kennedy runway were dispelled.

The astronauts were awakened Monday night to begin landing preparations, according to NASA, with mission control playing Willie Nelson's "On the Road Again" as their wake-up call.

The shuttle launched on April 5 and docked to the Space Station two days later.