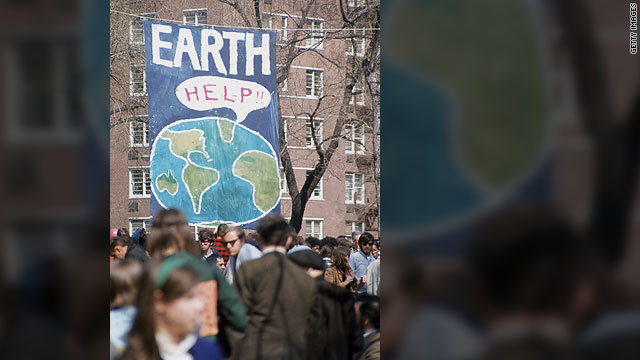 A crowd gathers at a rally in New York on the first Earth Day in 1970.
STORY HIGHLIGHTS

The dean's office at Williams College rang the young assistant professor to ask if it could send a junior dean to observe his students. During a time of frequent college campus protests, the administration wanted to make sure the first Earth Day was a day of peaceful rallies, lectures and debates.

"I think they were a little nervous about what we were doing," he said of his environmental science class. "It was high emotional content. People were really upset to learn about the bad things that were happening to the environment then."

After the 75 students finished class, which dealt with the dangers of pesticides, they joined other students at a rally on the Williamstown, Massachusetts, campus.

About half the 2,000 students at the small private school participated in the rally. Thousands of other colleges, high schools and elementary schools across the United States also took part.

"People were pretty upbeat [that day]. Finally we were tackling another unaddressed issue," he said. "There was a real can-do attitude and a real sense that individual and public engagement could change things. A very different attitude than one sees today."

The year 1970 was one of the most tumultuous in U.S. history, during a time when many Americans were growing angrier at the government. The United States was involved in a controversial war in southeast Asia and the invasion of Cambodia set off more student protests and strikes. 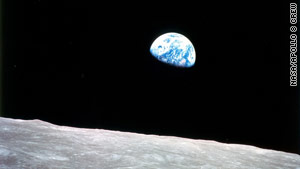 The Earthrise photo was taken by Apollo 8 astronauts as they returned from the moon in December 1968.

People were also increasingly distrustful of big corporations, which they saw as lovers of profit and not the land. Pollution and conservation issues had been gaining the attention of the public. It started with Rachel Carson's popular 1962 book on the dangers of pesticides, "Silent Spring," and the eye on the planet increased with a photo of the Earth taken from Apollo 8 as it orbited near the moon in 1968. The "Earthrise" photo showed Americans the beauty of Earth from a new perspective.

One U.S. lawmaker aimed to bring his favorite issue into the spotlight for one day. Earth Day was the idea of the late Gaylord Nelson, a U.S. senator from Wisconsin who in a speech in September 1969 proposed a day for an environmental teach-in.

Nelson had been an environmental activist for years and in 1963, shortly after he took office in the Senate, he persuaded President Kennedy to go on a five-state conservation tour. The media and the country hardly noticed the tour, so Nelson pondered for some time on how to raise consciousness about the problem. After a visit to an oil spill in 1969, he came up with the idea of involving students in a nationwide grass-roots day of environmental awareness.

What kind of world do you want to live in? See what iReporters had to say

He suggested April 22, a Wednesday, as an ideal day to hold the teach-in, as a weekday event would mean more students would be involved, according to nelsonearthday.net, a website run by the Nelson Institute for Environmental Studies.

On that first Earth Day, Nelson, 53, spoke to a larger than expected crowd in Denver, Colorado. He told those gathered that the environmental movement was more than eliminating acid rain, cleaning rivers or saving the whales.

About 20 million Americans participated in the first Earth Day, organizers said, though that number is most likely inflated. A CBS News special hosted by Walter Cronkite that night called it a "mixed success," with many people participating, but with most "predominantly young, predominantly white, predominantly anti-[President] Nixon."

Still, it was a remarkable day in a watershed year that began the modern environmental movement. Later in 1970, the government passed an expanded Clean Air Act and created the Environmental Protection Agency.

That year marked a real change in the public's attitude toward the planet, and over the past 40 years, people have become more environmentally aware, said the head of a leading environmental organization. 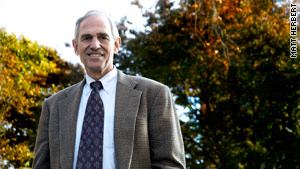 Professor William Moomaw has been a part of the environmental movement since the 1960s.

Moomaw said that in many ways, the environment is a lot better than 40 years ago. Take for instance the air in Los Angeles, California, which was horrendous then. The ozone level in the area was almost five times greater than the national standard in 1970, according to the California EPA. In 2000, the level had dropped by nearly 70 percent.

"And we changed laws and practices and purchases and it got better," he said. "I think the belief in the beginning was that somehow the public would sort of whip the government into shape and they would do the right thing and the world would be saved. I think we all discovered the hard way that it's more complicated than that."

What has changed, the environmentalists say, is there has been a subtle shift from the days of teach-ins to community activism by the middle class to a social movement where people realize the connections between economic status and the health of the planet.

"People are being more realistic about the larger shape of the challenge," said Tom Athanasiou, director of EcoEquity, a think tank that deals with developing viable approaches to climate change. "There's no way that we're going to be able to deal with the climate while leaving all the poor people behind."

He said the green jobs movement -- developing renewable energy companies, hiring companies that use or sell environmentally friendly products -- is key, especially in countries hit by high unemployment. A creative look at how to build infrastructure that emits far less carbon dioxide is vital, he said.

An education in saving energy

How important is 'going green' to you?
RELATED TOPICS

"You have to give the poor alternatives other than to pour into these slum cities that are becoming the norm. You have to give them lower impact options," he said of the movement of people in developing nations to polluted big cities.

The issue is to provide goods and services in an environmentally friendly way that doesn't negatively affect the economy and social structure, Moomaw said.

"The shift that's taken place is to get beyond just protecting the environment. The new way that it is talked about is in terms of sustainable development," he said.

Beinecke said one of the things that is greatly different from 1970 is how to frame the solution to the world's problems. Governments, businesses and individuals all must take a role in eliminating the factors of climate change, but solutions need to be practical and not too expensive, she said.

Earth Day continues to have relevance even though the focus of the event has changed, the experts said. While it is no longer just a college-based event, it still offers teaching opportunities to all types of people and enhances the increased environmental awareness that this generation has gained.

More people are "connecting the dots and understanding that what they do in their lives has an impact on others," Athanasiou said.

Moomaw added that not only are companies now involved in Earth Day, but they are also much more involved in environmental protection.

"There are certainly many, many more corporations that are not only willingly complying with environmental laws but many are going beyond them," he said. "It's an impressive group of companies that are doing those things and they're making a real difference. I don't think anybody believed that would happen in 1970."

That includes companies like DuPont, which has taken steps to dramatically cut its greenhouse gas emissions and use more renewable fuels, and IBM, which has an excellent environmental record, Moomaw said.

For the 40th anniversary of Earth Day, the Earth Day Network is sponsoring events on the National Mall in Washington on April 24 and 25. The schedule includes a climate rally and concert on Sunday featuring Sting and John Legend.

"Earth Day continues to be a national reminder," Beinecke said. "Companies and individuals feel a responsibility to think about the environment, and that is really important."