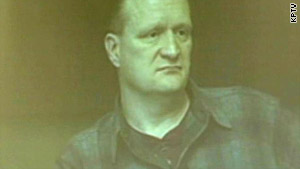 Timur Dykes was removed as a Scout leader but remained with the organization as a volunteer.

(CNN) -- An Oregon jury on Friday found the Boy Scouts of America liable for the sexual abuse of a 12-year-old boy more than 25 years ago, returning a verdict of $18.5 million in punitive damages.

The plaintiff, Kerry Lewis, now 38, allowed his name to be used publicly during the trial, according to his attorneys. He is among six men suing the Boy Scouts over allegations of sexual abuse.

Attorney Kelly Clark has said that when his clients were boys during the 1980s, the organization knew that at least one of them had been abused by former assistant Scoutmaster Timur Dykes. The 53-year-old convicted sex offender was released from prison in 2005 and paroled until 2013. He could not be reached on Friday.

Clark also alleged that though the scout leader was removed, he was allowed to stay on as a volunteer and the abuse continued. In 1983, Dykes told troop leaders he abused 17 scouts, according to plaintiff's attorneys.

During the six-week trial, Clark produced documents that he said were part of an archive of previously secret Boy Scout files that chronicled decades of abuse of boys.

Earlier this month, jurors in Portland awarded Lewis $1.4 million after finding that the organization was negligent in allowing a Scout leader who was a sex offender to have contact with him. Under Oregon law, 60 percent of a punitive damages award goes to the state's crime victims' fund.

The Boy Scouts of America did not immediately respond to CNN's requests for comment on Friday. However, lawyers for the organization have said it had not known about the scout leader's record.

Once the Scouts did learn about it, the organization acted immediately and cooperated with police, the lawyers have said.

The Boy Scouts have acknowledged the organization does have confidential files, but said they are made confidential in order to protect people who are ineligible to be scout leaders, but who may not have done anything illegal.

A scouts spokesman has said that, in recent years, the organization has taken extensive measures to keep abusers out.

In a written statement earlier this month, the Scouts said the organization intends to appeal the initial verdict.

"We are gravely disappointed with the verdict," it said. "We believe that the allegations made against our youth protection efforts are not valid."

It added, "We are saddened by what happened to the plaintiff. The actions of the man who committed these crimes do not represent the values and ideals of the Boy Scouts of America.

"The safety of the young people currently in the Scouting program has never been in question during these legal proceedings. The case focused on a discussion about what society and the BSA knew about child abuse approximately three decades ago.

"This is a long-standing societal issue that every youth-serving organization must address. Based on the standard of care of that time, the BSA believes it acted responsibly and that the evidence presented during the trial does not justify the verdict."

The church has sponsored a number of Boy Scout troops, including the one to which the plaintiff belonged.

Steve English, a lawyer representing the church, has said the verdict has no impact on the church, since it settled the case out of court more than a year ago.

"The church absolutely condemns any kind of child abuse," he said. "Because of the way the law is set up in Oregon, we thought it made sense both to help the victim and also to get this behind the victim and us to settle this case."