Oil wreaks havoc on Gulf Coast livelihoods before it arrives 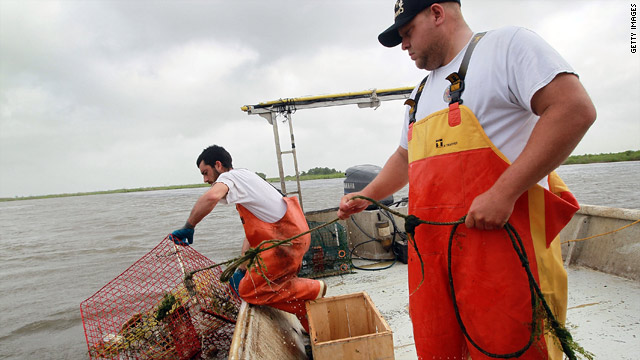 (CNN) -- As Gulf Coast residents wait for a huge oil slick to reach their shores, the spill and the massive response already have begun wreaking havoc on livelihoods in a region where jobs are largely dependent on two ocean intensive industries: seafood and tourism.

Stephen Denmark, a city council member in Dauphin Island, Alabama, said Saturday that local scientists are predicting that the seafood crop could take a decade to recover from the oil slick.

"The last two years have been tough already," Denmark said, referring to the recession. "This will be catastrophic to the mom-and-pop businesses, which is 90 percent of the business down here on the island."

But some Gulf Coast oyster beds and other seafood harvesting grounds are already awash in oil, according to Casi Callaway, executive director of the Alabama-based environmental group Mobile Baykeeper.

"It's already covering shrimp beds and shrimp grounds in the Gulf," she said. "So it's here and it's now and it's happening."

Callaway said that the oil could ruin oyster beds for up to two decades.

Forty percent of the fish harvested in the lower 48 states comes from the Gulf of Mexico.

Vacationers, meanwhile, spend billions of dollars every year in the region. But this week, many Americans canceled plans to travel to the Gulf Coast over the summer.

"I'm pretty much on pause right now ... it's just a big waiting game," said David Boola, a fisherman who leads boat trips out of Venice, Louisiana.

"I'm extremely worried because I have customers that [have] already canceled trips," Boola said Saturday. "I should be out taking people fishing today and I'm not. I'm not making money today. Or tomorrow. I'm worried about the 'now' factor, you know?"

Besides the oil, the deployment of hundreds of thousands of feet of floating booms along the Gulf Coast to protect sensitive land areas has kept many fishing boats tied up at the dock.

In Florida's Panhandle, where Saturday was the deadline for tourists to cancel summer plans at many hotels, phones were ringing off the hook.

"In the hurricane season, you know you can't stop the hurricane, but you can prepare ... and we're great at that," said Jewel Cannada-Wynn, deputy mayor of Pensacola, Florida. "But how do we deal with an oil spill? It's a helpless feeling."

Blows to seafood and tourism are likely to be felt in other industries in the Gulf Coast and beyond.