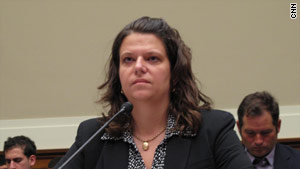 "There are so many unknowns" about the effects of oil dispersants, researcher Carys Mitchelmore testified Friday.
STORY HIGHLIGHTS

Washington (CNN) -- The damaging effects of the massive oil spill in the Gulf of Mexico will be felt all the way to Europe and the Arctic, a top scientist told a congressional panel Friday.

Other scientists and researchers -- invited to brief members of the House Energy and Commerce Committee -- warned that the thousands of barrels of oil still gushing into the Gulf are contributing to a potential ecological disaster of unknown proportions.

The briefing was part of an ongoing effort to draw on a broad range of expertise for what has been, in the eyes of many observers, a frustrating and ineffective cleanup effort.

"This is not just a regional issue for the wildlife," said Carl Safina, the president of the Blue Ocean Institute. Noting common migratory patterns, he warned that multiple forms of marine life from across the Atlantic Ocean "come into the Gulf to breed."

Safina blasted BP, the company in control of the well responsible for the spill.

"I think asking BP for answers is the wrong place to look," he said. "They seem to have cut corners on some critical junctures. We keep asking their permission to go down and measure the oil that's coming out. ... This mystifies me, because they are on our property now."

BP, he said, "blew it in a really huge way. Unfortunately, it's now up to all of us to figure out exactly what to do next."

The National Geographic Society's Sylvia Earle said that asking for BP to play a leading role in containment efforts was akin to "relying on the foxes to look after the chicken coop."

"The lack of knowing [the extent of the spill and the damage] is something that we should fear," she said. There is a "lack of understanding what the consequences of this action really will be to the ocean and then back to ourselves."

The researchers disputed the value of trying to break up the spill by injecting chemicals into the column of pressurized crude oil erupting from the seabed floor.

"We don't know effects of dispersants applied a mile underwater. There's been no laboratory testing at all," Earle noted.

"Adding the dispersants ... is causing other problems" because the quantity used is likely to be toxic to marine life, she warned.

Researcher Carys Mitchelmore of the University of Maryland agreed that there is a risk of doing more harm than good with the chemicals.

"I'm very concerned, because I don't know," she said. "There are so many unknowns. We can't see these organisms dying and dropping to the sea bed."

Mitchelmore noted that both the crude oil plume and the chemicals used to counteract it are "so hard to follow. It's much easier to see a surface slick."

Safina argued that BP was using the dispersants as a public relations tool, so cameras can't see the extent of the oil slick.