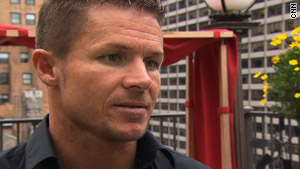 Felix Baumgartner will ride a helium balloon to an altitude of almost 23 miles, then jump.
STORY HIGHLIGHTS
RELATED TOPICS

New York (CNN) -- An Austrian daredevil is planning to become the first person to break the sound barrier in a free fall, without riding in a vehicle.

This summer in New Mexico, Felix Baumgartner hopes to make the highest, longest and fastest fall ever.

His attempt will take him to an altitude where the atmosphere ends and space begins -- where blood boils at body temperature, and the air temperature could be as low as minus 70 degrees Fahrenheit.

The first step in the attempt will be riding a helium balloon to an altitude of 120,000 feet above sea level -- almost 23 miles -- higher than anyone has ascended in a balloon before.

Then, wearing a pressurized suit and oxygen tanks, he plans to jump out of his capsule for a five-minute fall back to Earth. Within the first 30 seconds, he expects to be falling faster than the speed of sound, which at that altitude is around 690 miles per hour. Crossing that barrier would mark a new test of the limits of the human body.

"This is what we want to find out: What happens to the human body when it breaks the speed of sound," Baumgartner said. "That's a big question mark."

To increase his chances of survival, his parachute is set to open automatically, even if he's unconscious or spinning so fast his hands are pinned by the G-force. He said his engineers are taking every precaution, testing out the suit in a wind tunnel and providing him with a backup chute, sealed gloves and boots, and an advanced helmet.

"This helmet also has face-shield heating to make sure your visor's not getting fogged up on the way down, because that would be fatal," he said. "If you don't see anything, you can't move anymore. You can't make decisions."

Still, the risk of the unknown remains. "If something happens, it happens fast," he said. "You can never say you're not going to get killed under any circumstances," but "we have a lot of solutions for emergency situations like this."

A chain reaction of events would have to occur before the jump could turn fatal, he said.

A potential benefit from the mission, he said, would be demonstrating that it is possible to return from space without a spacecraft.

"In the future, a lot more tourists will go and travel to space. And if something goes wrong with their spacecraft, they have to return to Earth somehow," he said. "We will show to the world that egress from high altitude is survivable."

The main difference is that Baumgartner will start from a standstill, whereas astronauts in a craft like the space shuttle are traveling at orbital speeds close to 18,000 mph when their re-entry begins.

The previous record for the highest jump has stood for half a century, since it was set in 1960 by Joe Kittinger with the Air Force. He reached an altitude of 102,800 feet, and says it felt like a very distant and hostile place to be.

"You know that right outside of you is a vacuum of space," he said, "and without the protection of that pressure suit, you cannot live. And that's an interesting thought."

Baumgartner, whose attempt is being financed by energy drink maker Red Bull, has enlisted Kittinger as a consultant.

"We have learned a lot from people in the past who tried to break that record, and they all failed," Baumgartner said. "Some of these people got killed."

But he adds, "I think it's human nature, you know. Records are meant to be broken. And I'm a very competitive person. I like the challenge."