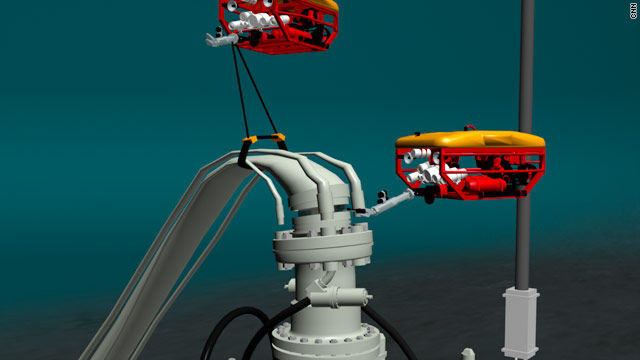 Venice, Louisiana (CNN) -- BP has abandoned its original plan to use a diamond wire cutter that its engineers had hoped would cleanly cut the riser pipe spewing oil into the Gulf of Mexico. It will instead use a more effective, if less precise, cutter, the federal government's point man on the disaster said Wednesday.

The diamond wire cutter plan was dumped after the device got stuck midway through the pipe. It was freed at 2:10 p.m. ET and taken to the surface, Coast Guard Adm. Thad Allen told CNN.

The next move will be to use the sheer-cutting device that made Tuesday's successful cut on the riser. Because the rougher surface left by that cut will not accommodate the tight seal needed for installation of the lower-marine riser package, engineers will use the "top hat" instead, he said.

That 5-foot-tall, 4-foot-diameter structure had been considered before, but engineers opted instead for an insertion tube that wound up capturing only about 20 percent of the oil from the site of the leak to the surface.

Full coverage of the oil disaster

The mile-deep cutting effort, conducted by robot submarines, came as shifting weather patterns threatened to push more oil toward the shores of Mississippi, Alabama and Florida.

Video: La. leader: Obama 'lived up to his word'

Video: Jindal: Do this or get out of the way
RELATED TOPICS

Alabama and Mississippi reported weathered oil and tar balls on barrier islands Tuesday, and Florida Gov. Charlie Crist warned Wednesday that the white sands of the Panhandle could start seeing crude wash ashore "in a day or two."

U.S. officials raised concerns about the long-term environmental effects of what would effectively amount to building dozens of miles of new barrier islands off the state's coast.

But Louisiana Gov. Bobby Jindal and other officials had pushed for approval of the plan as a last-ditch effort to prevent further damage.

"It's very difficult if not impossible to clean it up out of the marsh," said Billy Nungesser, president of Louisiana's Plaquemines Parish, which includes the mouth of the Mississippi River.

"That's why we need this first line of defense, and we're going to work hard, very quickly, to get that berm out there to give us the maximum protection and give us a fighting chance."

On Day 44 of the disaster, National Oceanographic and Atmospheric Administration extended fishing restrictions deeper into the Gulf and eastward along the Florida Panhandle.

The latest order means 37 percent of the Gulf is now closed to fishing due to the spill, and it moves the boundaries of the restricted zone eastward to just south of Navarre, Florida, and southward to the edge of the Dry Tortugas, off Key West.

The leading edge of the spill was within 10 miles of Pensacola, Florida, on Wednesday, with "thousands of tar balls" spotted in the water, Crist told reporters.

The state was scrambling to deploy more boom in its westernmost counties and to get skimmer boats out onto the water to scoop up as much of the oil as possible, he said.

With the help of $25 million from BP, Florida has been running ads trying to emphasize that its beaches and resorts have stayed open and oil-free. Crist said some of those ads will be edited, if necessary.

Watch Florida brace for the oil

"Obviously, you have to have truth in advertising," he said. "So we want to make sure that if it does come on our shores, that we redirect the message so that it is appropriate, that it is accurate and discusses where it is -- and maybe more importantly, where it is not."

Concern has spread southward. The head of the Department of the Environment and Natural Resources in Mexico said Wednesday that five states in Mexico are monitoring the oil spill in the event it reaches land in the country, according to the state-run news agency Notimex.

BP's latest attempt to curtail the flow comes after several failures, including a closely watched bid to use heavy drilling fluid and cement to shut down the well.

The well erupted after an explosion and fire on the Deepwater Horizon drilling rig on April 20 that killed 11 people. The rig sank two days later, leaving up to 19,000 barrels (798,000 gallons) of oil pouring into the Gulf, according to federal estimates.

The gusher may not be shut until August, when BP expects to complete relief wells that will take the pressure off the one now spewing into the Gulf.

BP , rig owner Transocean Ltd. and oilfield services company Halliburton have blamed each other for the disaster. But BP, as the well's owner, is responsible for the costs of the cleanup under federal law. Suttles said the company has spent more than $1 billion to clean up the spill.

And BP has taken a beating in the halls of government, drawing the ire of members of Congress, officials in the Gulf states and the Obama administration, which announced Tuesday that a criminal investigation of the spill was under way.

Federal officials, the administration said, will no longer hold joint news briefings with the company. Before Allen's news conference Wednesday at a BP operations center, a Coast Guard member struggled to tear a BP logo from the podium.