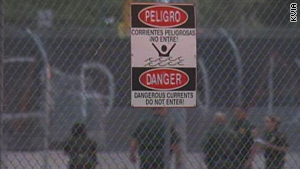 The teen's death was the second at the hands of U.S. border authorities in less than two weeks.
STORY HIGHLIGHTS
RELATED TOPICS

(CNN) -- The Mexican government is requesting a quick and transparent investigation into the fatal shooting by a U.S. Border Patrol agent of a Mexican teen in Ciudad Juarez on Monday night, the Foreign Ministry said Tuesday.

The teen was shot during a rock-throwing incident, Mexican and U.S. officials said.

Mexico "reiterates that the use of firearms to repel a rock attack represents a disproportionate use of force, particularly coming from authorities who receive specialized training on the matter," the Foreign Ministry said Tuesday in a news release.

The teen's death was the second at the hands of U.S. border authorities in less than two weeks.

Monday night's incident started around 6:30 p.m. when Customs and Border Protection Border Patrol agents responded to a report of a group of suspected illegal immigrants being smuggled into the United States near the Paso del Norte port of entry, FBI Special Agent Andrea Simmons said.

A suspect identified as Oscar Ivan Pineda Ayala was initially detained on the Rio Grande levee, said the FBI, which is leading the investigation.

"Another agent arrived on his bicycle along the cement apron that forms the riverbank on the U.S. side," Simmons said in a release. "That agent detained a second subject, Augustin Alcaraz Reyes, but other subjects ran into Mexico and began to throw rocks at the agent.

"This agent, who had the second subject detained on the ground, gave verbal commands to the remaining subjects to stop and retreat," Simmons said. "However, the subjects surrounded the agent and continued to throw rocks at him. The agent then fired his service weapon several times, striking one subject who later died."

Simmons told CNN earlier that she did not know whether the person who was shot was on the Mexican or U.S. side of the border, but that the agent never left U.S. territory.

The body was found on the Mexican side of the border, Simmons said.

Belmonte said Hernandez had been shot in the head.

"The young man was not armed," Ciudad Juarez spokesman Sergio Belmonte said. "He did not have the physical size to threaten anyone. The aggression (by the U.S. agent) is evident."

The shooting occurred underneath the Black Bridge, a railroad span that connects the two countries, the Mexican official said.

The FBI said the "area where this incident occurred is a known high-risk crime area where rocks are regularly thrown at Border Patrol agents and where other assaults have been reported."

The FBI, which has jurisdiction in any assault on a federal officer, is leading the U.S. investigation with assistance from the El Paso Police Department, the Border Patrol and other federal agencies, Simmons said.

San Diego police, who are investigating the death of Anastasio Hernandez, said he was beaten with a baton and shot with a stun gun after he became combative. California medical officials ruled his death a homicide.

The investigation in that case continues.

Mexican officials complained Tuesday that they see an increasing trend.

"The growing frequency of this type of event reflects a worrisome increment in the use of excessive force on the part of some border authorities," the Foreign Ministry said.

According to the ministry, the number of Mexicans who have been killed or wounded by U.S. border authorities has increased from five in 2008 to 12 in 2009 and 17 so far this year.

Mark Qualia, a spokesman for U.S. Customs and Border Protection, said he could not comment because he does not know where the Mexican government obtained its statistics.

Lethal force, he said, is allowed "when an agent is in imminent threat of physical or bodily harm, which could cause death or injury or in protection of an innocent third party."

The determination of when to use lethal force, Qualia said, is made by each individual agent at the scene.

From October 1 through May 31, he said, Custom and Border Protection agents have used their firearms 31 times.

Rock-throwing can be considered a dangerous assault, Qualia said: "They're not chunking pebbles."