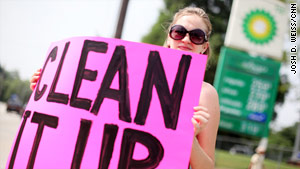 Atlanta, Georgia (CNN) -- About a dozen protesters gathered Saturday morning under a BP gas station sign in metro Atlanta, Georgia, picketing and cheering as motorists who drove by honked.

The demonstration was one of dozens happening in cities as part of the "Worldwide BP Protest Day," a Facebook group that claims to have more than 350,000 supporters.

"I don't ever intend to use BP again," said Atlanta resident Monica Manuel who held up a cardboard sign, "Boycott big polluters."

Another protester, Ruth Resnicow, said it was devastating to see the wildlife on the Gulf Coast being affected by the worst oil disaster in U.S. history. "The oiled pelican has been a logo of the disaster. People need to see change."

In 2008, the London, England-based oil giant announced it was exiting the retail gasoline business because margins were lousy. Today, the 11,500 gas stations that carry its logo in the United States are owned by independent franchisees such as Russell Scaramella of Georgia Oil Holdings.

He owns 22 BP stations in the Atlanta area that he acquired from the U.K. firm in March 2009, and he said he is worried the bad publicity eventually will hurt his bottom line.

"The hardest part is on the employees because they are seeing the protests. ... They are concerned about their jobs and families," Scaramella said.

Protests such as these are likely to be counterproductive, said Jeff Lenard, a spokesman for the National Association of Convenience Stores. They can hurt the bottom line of locally owned gas stations instead.

"So whether you are protesting by marching, or by not buying gas, you are hurting the small business, but you are really not hurting BP," he said.

According to the U.S. Energy Information Administration, purchasing gasoline from a given company does not mean the gasoline was produced by that particular company's refineries.

After oil companies such as BP extract crude oil from the ground, it is sent to the company's refineries to be refined into gasoline. The gasoline is then sent through shared pipelines or shipped in batches to storage terminals.

Anyone who wants to retail gasoline, such as grocery chains, can purchase this gasoline from BP's terminals as "unbranded" gasoline. It only becomes "branded" when BP injects its own additives into the gasoline, which is then sold to retailers such as those owned by Scaramella.

BP protesters said they understand that they might be hurting independently owned gas stations, but they said it's a signal that operators should disassociate themselves from the gas giant or get out of the gas retailing industry altogether.

Michael Monahan, who was protesting at the BP gas station in Atlanta, said: "I feel kind of sorry for them; they're stuck in the middle. But there's not a headquarters for me to stand under today; there's just that sign."

Gas stations cannot simply drop the BP logo though. Most franchise owners have contractual obligations to fulfill. Scaramella has a 20-year agreement with BP to carry its brand name and its gas.

"I understand people are angry and upset, and they have a right to be. But they're taking their anger at the wrong people," Scaramella said.

"If they want to have a protest at the park or somewhere else, super. But to come to my station to do it, and tell people not to buy my products or come inside my stores, to bash my business without even knowing us is hurtful."

BP gas station owners CNN contacted said they haven't seen a dip in business yet. Many have loyal enough customers, they said.

I feel kind of sorry for them; they're stuck in the middle. But there's not a headquarters for me to stand under today; there's just that sign.
--Michael Monahan, protestor at an Atlanta BP station
RELATED TOPICS

Drivers such as Amy McMurtrie who was refueling her car at a BP station this week said she's still pumping at BP as a matter of convenience.

"I used to live right here, and so this station was something I used all the time. So I'm very familiar with this station, and it's the first thing I thought of," she said.

Scaramella and other station owners along the Gulf Coast aren't sitting still. They have reached out to BP for assistance -- and help is arriving.

Independent owners of BP gas stations in Georgia and states along the Gulf Coast will be receiving signage, paid for by BP, early next week that clarifies that these gas stations are not owned and run by corporate BP.

According to preview images provided to gas station owners and managers, the signs that will be put up at the gasoline dispensers will read: "Part of your community. This BP station is owned and operated by people from this community. Your neighbors, your friends, your family. Thank you for your loyalty."

BP spokeswoman Sherry Boldt said they are also advising owners on how to answer questions from the public. "We think it's important to connect. They are the face of BP on the street," Boldt said.

Mark Murgash, a manager who helps to oversee some of Scaramella's gas stations, said he hopes these signs will provide some respite for him and his employees who have been facing the brunt of anti-BP sentiments.

"When I go to stores and I'm talking to our employees and they're down in the dumps, they feel horrible. They're not proud anymore to wear the BP shirts," Murgash said. "And it's just sick to our stomachs and there's nothing we can do [about the spill]."

Scaramella insists he's a victim of the spill, too. And if business turns for the worse, it might mean he will have to lay off employees.

"It hurts. It's sad for everybody involved," he said. "Everybody loses. Nobody wins in this situation."