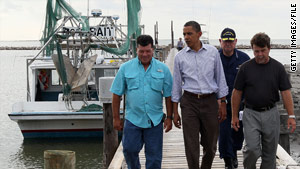 President Obama addresses the nation live Tuesday night at 8 ET with the latest on the BP oil disaster. Stay with CNN for updates on the cleanup and effort to stop the leak.

Washington (CNN) -- President Barack Obama will visit the Gulf states affected by the oil spill on Monday and Tuesday and then address the nation on Tuesday night from the White House on the next steps in responding to the environmental catastrophe, his senior adviser said Sunday.

On his fourth visit to the Gulf region since the disaster began on April 20, Obama will make stops in Theodore, Alabama; Gulfport, Mississippi, and Pensacola, Florida, according to senior administration officials.

After returning from the two-day trip, Obama will make a televised statement from the Oval Office on the night before he is scheduled to meet with top BP officials.

David Axelrod, the senior adviser to Obama, said the president would push BP to create a BP-funded escrow account that will pay for damage claims from the worsening oil spill. In addition, Axelrod said, the plan would call for an independent third party to handle the claims process.

"The president will use every legal device at his disposal to make sure that this money is escrowed and that there is an independent administrator so that claims are not slow-walked, people can get the relief they need in a timely fashion and that we don't create more victims from this terrible disaster," Axelrod told reporters.

Asked if Obama had legal authority to force BP to create the escrow fund, Axelrod said: "The advice is that we have the authority to compel such an escrow fund if it comes to that."

Asked about trying to force BP to use money intended for shareholder dividends to pay oil spill damages, Axelrod said: "Our interest is less in the dividends that they pay and in their, uh, how they deal with their shareholders than it is making sure the money is set aside for people in the Gulf. ... We're not trying to interfere with, interdict with their legal responsibilities, but we are going to make sure they meet their responsibilities to the people in the Gulf."

The administration's point man on the crisis, Coast Guard Adm. Thad Allen, said Sunday that the push for an escrow fund and third party administrator arose from concerns about BP's ability to handle the task.

"We've been very concerned about the claims process," Allen said on the CBS program "Face the Nation." "This is not a core function of an oil-producing company. And they usually retain a third party contractor to do that. It's not clear to us that there's the right of transparency involved concerning the data ... how long it takes to pay claims."

Allen noted that BP was "a company that's got a lot of wealth inside it," and therefore he believed it could handle the bill for damages.

Meanwhile, Senate Majority Leader Harry Reid is circulating a letter among his caucus that calls for BP to create a $20 billion account to pay oil spill clean-up costs and damages.

The letter to BP Group Chief Executive Tony Hayward, signed so far by 54 members of the Senate Democratic caucus, notes that the damages from the smaller Exxon Valdez spill in Alaska's Prince William Sound amounted to $7 billion, but Exxon paid far less for damages while continuing to make major profits.

"In order to ensure BP fully and quickly covers the cost of this disaster, we are calling on BP to immediately establish a special account of $20 billion, administered by an independent trustee, to be used for payment of economic damages and clean-up costs," the senators' letter says.

The White House has asked U.S. television networks for time to broadcast Obama's address at 8 p.m. ET on Tuesday. According to the White House, the address is expected to be about 15 minutes long and cover the Gulf oil crisis, including reorganization at the Mineral Management Service in the Interior Department and how much oil is flowing from the broken well at the bottom of the Gulf of Mexico.

In addition, the address will look ahead to the president's meeting with BP executives on Wednesday, the White House said.

The decision for Obama to make a major address to the nation on the Gulf oil spill came together Friday and Saturday, according to senior administration officials. Just days before, the White House had indicated no such address was in the works for the very near future.

On Sunday talk shows, politicians argued over the effectiveness of the administration's response since the April 20 explosion and fire on an offshore oil rig started the disaster.

Republican Rep. Mike Pence of Indiana criticized Obama for what he called a slow reaction to the magnitude of the crisis, telling CNN's "State of the Union" that the president failed to take active leadership of the situation.

"This administration did not send Cabinet-level officials to the region until 10 days after the explosion occurred," Pence said. "It would be two weeks after the explosion occurred that we began to hear from members of Congress from the region that you literally had fishermen standing on docks, you had parish presidents who were waiting for BP to give them permission to go out and deploy boom to protect their wetlands and their coastline."

The administration "continued to fail to provide the energetic leadership that the American people expect," Pence said, adding: "I think the fact that he never spoke to the CEO of British Petroleum for the first 50 days of this incident is emblematic of the kind of detached style of leadership that we're seeing here."

On the same program, Democratic Rep. James Clyburn of South Carolina said Obama was providing a "steady hand" and the intellectual capability to understand "all the nuances of various issues" involving the oil spill and resulting disaster. He rejected complaints that Obama failed to exert sufficient leadership, noting that the government response involved multiple agencies with different responsibilities.

"When you have so many entities involved in this, then it becomes a problem of trying to get everybody on to the same page and focus on to a process that seems sometimes to be contradictory if you go from one agency to another," Clyburn said. "If this were only one or two agencies involved in this process, that would be one thing. But there must be 12, 14, almost 20 entities involved, and so managing that gets clumsy sometimes."

Clyburn also said Obama "is much more hands-on at this point than he was at the beginning."

"I don't think any of us knew the real extent of the spill, because we were getting information from BP that now we find out was not quite true, in fact, was far from the truth," Clyburn said.