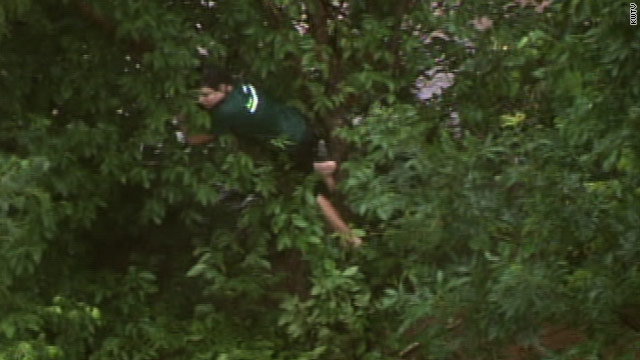 None of those injured required hospitalization, according to Michelann Ooten, information officer for the Oklahoma Department of Emergency Management.

Meanwhile, thunderstorms continued to roll across the southwestern and south-central part of the state Monday evening, sparing Oklahoma City more rain that would have likely worsened the flooding there.

A state of emergency has been declared in 59 of Oklahoma's 77 counties, at the request of Gov. Brad Henry, who is out of town. Lt. Gov. Jari Askins, who approved the emergency paperwork, commended the state's emergency crews, saying, "Once again, our heroic responders have demonstrated the Oklahoma Standard."

The National Weather Service said that almost 10 inches of rain fell between 2 a.m. and 11 a.m. Monday. A flash-flood watch was extended across central Oklahoma through 7 a.m. CT (8 a.m. ET) Tuesday.

The American Red Cross opened a center for any victims displaced by the storm at an elementary school in nearby Edmond, according the Ooten.

According to Oklahoma Gas & Electric's website, close to 1,500 customers were still without power by 8 p.m. Monday, including 1,300 in the Oklahoma City metro area.

Some washed-out Oklahoma City metro highways and ramps remained closed Monday night, including parts of Interstate 40, according to the Oklahoma Department of Transportation. Department officials urged drivers to be alert and warned them to avoid driving through water-covered roads.

The Oklahoma Highway Patrol reported getting about 180 calls related to the flash flooding. Troopers worked nearly 30 crashes, with a total of six injuries.

According to Ooten, several state buildings in the metro area were damaged in the deluge. Those affected agencies either closed or reduced their services because of the flooding.

Standing flood waters also can be dangerous, the Oklahoma State Department of Health warned. They urged residents to avoid the water as it can contain snakes, insects, sharp objects, oil, gasoline, and in some case raw sewage.

Glynda Chu, a police spokeswoman in nearby Edmond, said it was the worst flooding that city has seen in 25 years.

CNN iReporter Jennifer Oliver, who lives in Edmond, says there's normally a little creek with a 20-foot waterfall behind her house, but by late morning, she couldn't even make it out. "Never seen anything quite like that," Oliver said.

KOCO broadcast pictures of a car submerged almost to its windows. Dive teams navigated the raging waters to get to the scene and then rescued the car's occupants by boat. CNN affiliate KFOR showed another water rescue, with crews ferrying people to safety.

It's a dangerous situation for rescue crews as well. CNN affiliate KWTV showed gripping video of a woman trapped in a tree, struggling through the rushing water in search of stronger branches to hold. Oklahoma City Fire Battalion Chief Kirk Wright said the first rescue boat sent her way got stuck, stranding the three would-be rescuers. Another team set off for the scene and returned safely with all four people.

CNN iReporter Sarah Burris, who lives on the northwest side of Oklahoma City, said leaving her neighborhood wasn't even an option, with every way out under water. Burris said backlogged drains were regurgitating water into the streets.

The National Weather Service was issuing flood warnings across the breadbasket region Monday. Most of Nebraska and southeastern Kansas were under advisories Monday afternoon.

The Weather Service said 3 inches of rain had fallen in both Tulsa, Oklahoma, and Kansas City, Missouri, which experienced flash floods Monday morning. But Morris said the Kansas City overflow had affected only low-lying areas and didn't look like a threat to homes or businesses.