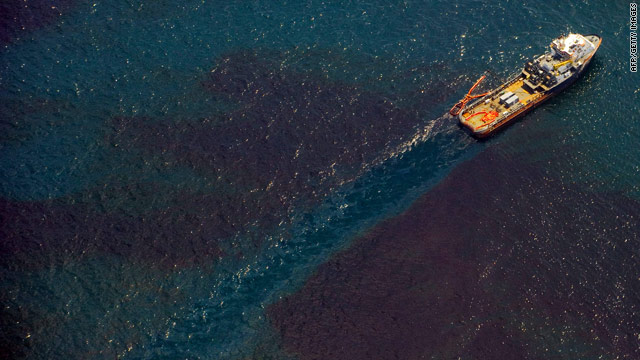 A ship passes through oil-covered water off the Louisiana coast on Saturday.
STORY HIGHLIGHTS

You've seen the devastation. Now it's your chance to help. Tune in Monday night for a special "Larry King Live, Disaster in the Gulf: How You Can Help" telethon featuring an all-star panel of guests joining forces in the Gulf region. Don't miss "Larry King Live," 8 p.m. ET Monday on CNN.

(CNN) -- A BP estimate made after the explosion of the Deepwater Horizon noted that as much as 100,000 barrels per day could leak into the ocean if the blowout preventer and wellhead were removed, a higher worst-case scenario than previously reported.

According to an internal BP document released Sunday by Rep. Edward Markey, D-Massachusetts, BP believed that the worst-case scenario could be as high as 100,000 barrels, or 4.2 million gallons of oil per day.

The figure is the highest yet to surface regarding the leaking oil well. At the disaster's outset, BP claimed the leak was about 1,000 barrels a day, a number it later revised to 5,000 and then much higher. BP told the House Energy and Commerce Committee that the worst-case scenario was 60,000 barrels (2.5 million gallons) a day, lower than what the document states.

The document, submitted in May, maintains the 60,000 barrel estimate, but stipulates that if the "blowout preventer and wellhead are removed and if we have incorrectly modeled the restrictions, the rate could be as high as 100,000 barrels a day."

Markey said the document "raises very troubling questions about what BP knew and when they knew it."

"It is clear that, from the beginning, BP has not been straightforward with the government or the American people about the true size of this spill," said Markey, the chairman of the Energy and Environment Subcommittee in the House Energy and Commerce Committee.

Video: The Smithsonian and the Gulf

"Considering what is now known about BP's problems with this well prior to the Deepwater Horizon explosion, including cementing issues, leaks in the blowout preventer and gas kicks, BP should have been more honest about the dangerous condition of the well bore," Markey said in a statement.

BP spokesman Robert Wine said the May estimate cited in Markey's document is irrelevant to the current situation because the oil company has no intention of removing the well's blowout preventer.

"The allegation doesn't make sense," Wine told CNN. "Why on earth would we remove the blowout preventer when it's sitting on top of the sea well and providing some control (of the spill)?"

Toby Odone, another spokesman for BP, added that the blowout preventer will be removed only when the well is completely killed.

A blowout preventer is designed to seal off a well in the event of an emergency, but the device has not been working since the April 20 explosion aboard the Deepwater Horizon.

State senators designated Sunday as a day for citizens to ask for God's help dealing with the oil disaster.

"Thus far efforts made by mortals to try to solve the crisis have been to no avail," state Sen. Robert Adley said in a statement released after last week's unanimous vote for the day of prayer. "It is clearly time for a miracle for us."

The resolution names Sunday as a statewide day of prayer in Louisiana and calls on people of all religions throughout the Gulf Coast "to pray for an end to this environmental emergency, sparing us all from the destruction of both culture and livelihood."

Also Sunday, wildlife officials were planning to transport and release 40 pelicans that rescuers rehabilitated after finding them covered with oil. The birds will be moved from New Orleans, Louisiana, to the Aransas National Wildlife Refuge in Port Aransas, Texas.

As much as 60,000 barrels (2.5 million gallons) of oil may be gushing into the Gulf every day, new government estimates found last week.

BP said it was able to capture roughly 8,480 barrels of oil from midnight to 12 p.m. Saturday. The company said it captured 24,500 barrels -- just over a million gallons -- of oil Friday, a little less than it captured the day before.

BP said Saturday that it has paid $104 million to residents along the Gulf Coast who have filed claims related to the Gulf oil spill, issuing more than 31,000 checks in the past seven weeks.

There was no immediate response from local, state or federal officials to BP's tally of its payments.

Meanwhile, oil recovery efforts in the Gulf resumed Saturday morning on the drill ship Discoverer Enterprise, after work was suspended for about 10 hours because of a mechanical problem.

A venting device aboard the drilling ship was not working properly, said Ayla Kelley, spokesperson for the Deepwater Horizon command center.

Other recovery efforts continued during the time that the Discoverer Enterprise was idled, she said.

She said the problem was with a blocked flame arrester, designed to prevent oil from combusting by extinguishing the flame.