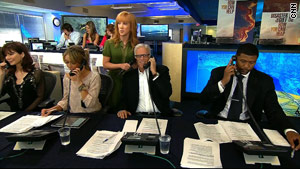 Los Angeles, California (CNN) -- Large and small donations flowed in Monday evening as dozens of celebrities answered phones for Larry King's telethon to help the people of the U.S. Gulf Coast suffering from the oil disaster.

"A hundred dollars? Wow! Thanks you so much," rocker Tyson Ritter told one donor who called in.

The two-hour CNN show raised $1.3 million with proceeds going to three charities deeply involved in the efforts to help humans, wildlife and the environment.

Donors could choose to send their money to the United Way, National Wildlife Federation or The Nature Conservancy.

Celebrity journalist Giuliana Rancic said she was on the phone with "Barbara" from Kokomo, Indiana.

Actress Victoria Principal sat next to her on another call.

Singer Aaron Neville, a New Orleans native, said most of the calls he answered in New York were from people concerned about animals impacted by the oil.

"People are crying on the phone and giving money," Neville said.

Actor Ted Danson said it was important for him to "hear people's emotions, their fear and sadness" when they called in donations,

CNN correspondents reported live from the Gulf Coast, interviewing people whose lives have been interrupted by the oil disaster.

"The toughest thing I see is losing a way of life that we've had down here for generations and generations," said shrimper Archie Dantin in Pointe a la Hache, Louisiana.

A BP spokesman issued a statement Monday saying the oil company is "proceeding with urgency to make the situation right for the environment and for those who have affected by this tragic event."

"We stated from the beginning that we accept responsibility for cleaning up the spill and for paying all legitimate claims for those directly impacted financially by this environmental disaster," BP's statement said.

The company said over 65,000 claims have been submitted and more than 32,000 payments have been made, totaling more than $107 million.

"The average time from filing a claim to checks being issued is only a few days," BP siad. "Even for more complex business claims that have provided supporting documentation."

"But it will take time for that to happen, so we're here today to provide immediate relief to those in need," Rose said.