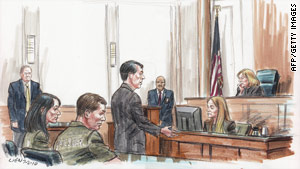 Alexandria, Virginia -- Two suspects charged with having served as deep-cover Russian agents living in the United States have told investigators they are Russian citizens and have been living under false identities, according to a court document released Friday.

A letter from prosecutors opposing bail for the suspects said that the man known as Michael Zottoli is really a Russian named Mikhail Kutzik. The government also said the woman known as Patricia Mills is a Russian citizen named Natalia Pereverzeva.

Prosecutors said that the couple waived their rights to remain silent and made the admissions soon after being arrested at their Arlington, Virginia residence over the weekend. The two were living as a married couple and have two small children.

The government document also said searches of the couple's home and two safe-deposit boxes they rented revealed that they contained cash, passports and other identity documents bearing their false identities. Investigators said they found $80,000 in one of the safe-deposit boxes. It was divided into eight unmarked envelopes, each of which contained $10,000 in what appeared to be new $100 bills, they said.

Video: What happens to their kids?

The document said another safe-deposit box rented by the two held $20,000 along with passports and other documents bearing their fake identities. Prosecutors said a laptop found in the couple's home had been brought from Russia to the United States by a co-conspirator and given to Zottoli, as court papers referred to him, in March.

The revelations are contained in a letter from federal prosecutors opposing bail for the couple and for another suspect named Mikhail Semenko.

The pair and Semenko remain in custody in Northern Virginia. They waived their rights to ask for bail in hearings at U.S. District Court in Alexandria, Virginia on Friday afternoon. Zottoli and Mills, as court papers called her, appeared in court wearing dark-green jail jumpsuits emblazoned with "prisoner" on the back of each. They did not speak to each other in court. They spoke only to give their assent when the judge asked if they realized they were waiving their rights to ask for bail.

Prosecutors had hoped to get the suspects moved quickly to New York to stand trial with seven others arrested in the case. But attorneys for the three requested a preliminary hearing a judge scheduled for July 7.

Semenko appeared at a separate hearing afterward. He too was dressed in a green jail jumpsuit. He spoke quietly with a slight Russian accent when asked if he understood he was relinquishing his right to ask for bail.

Magistrate Judge Theresa Buchanan ordered that the three continue to be held in jail and cited the government's contention they are dangers to the community and a flight risk.

CNN's Carol Cratty contributed to this story from Alexandria