Among Bobby Fischer's many mysteries: Chess champ's own father 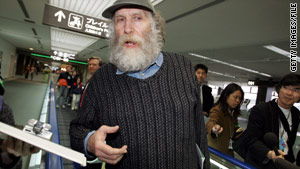 Chess genius Bobby Fischer talks to reporters in Japan in 2005. It's one of the countries in which he lived.

(CNN) -- Bobby Fischer was a master chess player, a man who once seemed the epitome of control. But Fischer's personal life was often chaotic and marked by mystery.

One of those mysteries seems of particular relevance this week. His body was exhumed in Iceland to satisfy a paternity suit a woman has filed claiming that Fischer fathered her 9-year-old daughter.

Los Angeles Times reporter Peter Nicholas and his wife, Clea Benson, also a reporter, spent years researching Fischer's life, digging through public records and conducting dozens of interviews with people who knew the Fischer family, discovering, among other things, that Bobby was lied to most of his life about who his real father was.

Last year, Nicholas wrote a comprehensive story about Fischer in the Times detailing the genius' complicated and controversial life.

"He was a star when I was a kid, Fonzi and John Travolta rolled into one," Nicholas told CNN. "I loved chess, and he embodied the game. When I became a journalist, I knew I had to use my skills to take a closer look at him."

Taking on the Soviets and God

The reporter recalled the euphoria that swept America in 1972 when Fischer wrested the World Championship from Russian Boris Spassky. The win earned the young and handsome kid from Brooklyn international fame, a notoriety that sometimes puffed an already large ego.

Fischer remarked to Shelby Lyman, chess commentator of that 1972 match, that he would like to play against God.

"He joked that it would probably end in a draw," Lyman told CNN. Bobby said he'd just explain to God, 'Look you have your domain, and I have mine.' "

Joking aside, Fischer was acutely uneasy with stardom. A shy eccentric given to oddball statements, he preferred to be buried in a book than featured on a magazine cover.

"He hated journalists," recalled Lyman. "He hated the spotlight."

Though Fischer resided in New York City at the height of his celebrity, when every experience was his for the taking, he preferred to eat at chain restaurants and fade into the easy anonymity of Greenwich Village.

Lyman once spent an entire day walking in the Village with Fischer. At one point, Fischer asked Lyman: "Should I go to college?"

"I was amazed. This is one of the most brilliant minds in history, and he was worried about a degree," said Lyman. "I went to Harvard, and it didn't make me a world champion.

"I think Bobby was always looking for someone to help guide him, a father figure maybe."

Raised by a single mother

Fischer was raised by a single mother, Regina Fischer. She was an internationally traveled physician who had worked in Moscow. For the era, that meant she might likely be an investigative target of J. Edgar Hoover's FBI, which was constantly on the hunt for communists in America.

Reporter Nicholas realized this and filed a Freedom of Information Act request with the FBI.

It was a shot in the dark.

It paid off. Big time.

A European Jew who had immigrated to the U.S. as a child, Regina Fischer was suspected by the bureau of being a spy for the Soviets. Because of a lack of evidence, the FBI closed its file on her in the 1970s, according to the reporters.

"They were reading her mail. They confronted her on the street," said Nicholas. "They harassed her. They interviewed her neighbors."

The documents shed a fantastic light on Bobby's upbringing.

Regina tried to create a loving home for her children. She raised Bobby and his older sister, Joan, in a sparse Brooklyn apartment. It was Joan who taught Bobby how to play chess.

Regina told her children that their father was a German biophysicist, Gerhardt Fischer. She divorced Gerhardt and he disappeared from the picture when Bobby was a toddler. FBI documents, according to the Los Angeles Times story, suggest Bobby Fischer's real father was Paul Felix Nemenyi, a Jewish Hungarian physicist, the journalists found.

Regina got pregnant with Bobby when Gerhardt was out of the country, the documents showed. And Regina was studying in Colorado the same time Nemenyi was teaching there, though at a different school.

Regina never acknowledged publicly that she had been untruthful about Bobby's biological father. Neither Nicholas nor his wife were able to determine for certain why she appeared to have lied.

"It may have been because she felt embarrassed for the world to know that she had gotten pregnant by a man she was not married to," said Nicholas. "In that era, that carried a tremendous stigma."

Regina's relationship with her son was complex, the journalists reported in the Times.

She was concerned, as any parent might be, that he was far too focused on one thing. She wanted her son to succeed at chess, but not at the cost of other pleasures in life. Her son had a peculiar temperament, and his passion for chess could descend into erratic volatility.

"When he was 16, she and Bobby got into a fight, and Bobby told people he kicked her out of their apartment," the journalist said. "It was a sad scene. She left him with the dirty dishes and ants."

Joan was by this time married and not living at home. Bobby was feeling his power. He was already famous. At 13, Fischer won against one of the best players in the United States, American professor Donald Byrne, in a match that was coined "The Game of the Century."

He conquers chess world, then drops out

"Chess is a struggle, a drama. It involves space and time and force, and these are quintessentially human interests," said Lyman. "A whole life is a series of multiple-choice questions, and that is what chess is. Here was a boy showing this to adults."

Starting at 14, Fischer won eight U.S. Championships. At 15, he became the youngest Grandmaster of the game.

"He was seen as the ultimate Cold War weapon against the Russians," said Lyman.

Next comes a large black hole in Fischer's biography. He dropped off the scene for the next 20 years and stopped playing competitive chess entirely. No one is really sure why.

He came out of retirement in 1992 for a rematch against Spassky.

Fischer won. The rematch was held in Yugoslavia.

Fischer never returned to the United States, living in numerous countries, including Hungary, Japan and the Philippines. When he made headlines in his later years, it was for making bizarre and anti-Semitic statements, including denying the Holocaust and praising the terror attacks of September 11.

"He had outbursts. People can focus on some of the things he said which were upsetting," said Lyman. "But Bobby Fischer was more than chess; his originality went far beyond the game.

"The Bobby Fischer I knew was a very happy guy, a man who beamed," he added. "There will never be another one greater, a figure from a musty past.