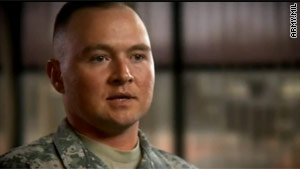 The statistics show that 32 soldiers killed themselves in June, the highest number in a single month since the Vietnam era. Twenty-one of them were on active duty, while 11 were in the National Guard or Army Reserve in an inactive status.

Seven of those soldiers killed themselves while serving in Iraq and Afghanistan, according to the Army numbers.

The spike comes after the monthly suicide numbers had dropped following a January high of 28, and Army officials admit they still haven't answered the question of why troops are committing suicide at a record rate.

"There were no trends to any one unit, camp, post or station," said Col. Chris Philbrick, head of the Army's suicide prevention task force. "I have no silver bullet to answer the question why."

He said he could offer only what he has said before: "Continued stress on the force and the opportunities we have been facing in terms of the challenges in the Army continue to cause these events to take place."

Including the June numbers, 145 soldiers have killed themselves this year, more than half of the total number for all of 2009, according to Army statistics.

In 2009, a record-breaking year for suicides in the service, 245 soldiers killed themselves.

In another attempt to put a halt to the trend, the Army released a suicide prevention video, a follow-up to one released last year. The updated video is designed to "hit home" with soldiers and instill the importance of getting help, Philbrick said.

The video, titled "Shoulder to Shoulder: I Will Never Quit," begins with the compelling story of a soldier whose wife said she was divorcing him. The soldier, Spc. Joseph Sanders, says his wife was his whole world.

"I grabbed my rifle, put it under my chin and pulled the trigger," Sanders says.

The gun did not fire, he says, and when he took the rifle apart he discovered that a key part was missing.

His Army buddy then tells viewers he removed the part because Sanders was showing signs that he could kill himself.

Asked why the Army thinks this video will be more effective than the first one, Philbrick said the soldiers will relate to it better.

Watch the video on the Army's Suicide Prevention website

The first video, made up of a mix of actors and real soldiers, "sucked," he said. It was rushed out, and troops did not believe in it. He said some even openly laughed at it.

"This video has all real soldiers with real stories," Philbrick said.

The video is part of a series of efforts to cut the suicide rate. Last year, the Army required all soldiers around the world to stop working and spend a day watching the first video and receiving suicide prevention training.

Philbrick said the alarming June numbers will not bring another Army-wide training day, called a stand-down. He said the new video will be incorporated immediately into the standard suicide prevention training for new troops and the yearly training all soldiers go through.