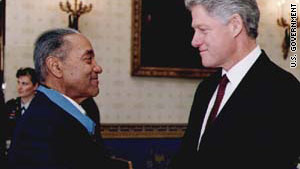 Washington (CNN) -- Vernon Baker earned a Medal of Honor for his actions during World War II. But because of what the U.S. government acknowledges was racism against African-Americans who performed heroically in the war, it took more than 50 years for him to get what he had earned.

Baker, one of only seven African-Americans to receive the nation's highest military honor from World War II, died Tuesday at his home in Idaho, according to his hometown police and coroner's offices.

He passed away after a long battle with cancer. His wife and members of his family were by his side. He was 90 years old.

Baker was orphaned at the age of 4, and was raised first by his grandparents and later at Father Flanagan's Boys Town in Nebraska.

He joined the Army six months before the Pearl Harbor attack and was part of the 92nd Infantry Division, the first unit of "colored" soldiers to see combat in World War II.

He eventually rose to the rank of lieutenant and was leading a platoon against entrenched German machine gun nests near Viareggio, Italy, on April 5, 1945.

His official Medal of Honor citation describes what he did:

"When his company was stopped by the concentration of fire from several machine gun emplacements, he crawled to one position and destroyed it, killing three Germans. Continuing forward, he attacked and enemy observation post and killed two occupants. With the aid of one of his men, Lieutenant Baker attacked two more machine gun nests, killing or wounding the four enemy soldiers occupying these positions. He then covered the evacuation of the wounded personnel of his company by occupying an exposed position and drawing the enemy's fire."

After spending the better part of a day putting his life at risk to lead his unit, Baker was back in action the next evening:

"On the following night Lieutenant Baker voluntarily led a battalion advance through enemy mine fields and heavy fire toward the division objective."

Seven African American heroes from World War II were chosen to receive the Medal of Honor from President Bill Clinton. Four of them had died in the war, and two others had died in the time since the war. Only Baker was at the White House to have the iconic star and pale blue ribbon draped around his neck.

During an interview with CNN before the White House ceremony on January 13, 1997, Baker spoke about the racism that delayed recognition of him and his fellow Medal of Honor recipients: "As I look back on it, it really makes me feel sad that we did our job, we fought, but we weren't appreciated"

After the White House ceremony, Baker told CNN, "I still don't feel like a hero. I just feel I was a soldier and I did my job, and I think I was rewarded for it."

Baker is survived by his wife, Heidy, and five children. He is expected to be buried at Arlington National Cemetery with full military honors.