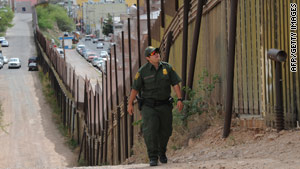 A US Border Patrol officer keeps watch over the border fence that divides the U.S. from Mexico in the town of Nogales, Arizona.
STORY HIGHLIGHTS

(CNN) -- U.S. National Guard forces will begin deploying along the U.S. border with Mexico in August and will be fully trained and deployed by the end of the month, government officials announced Monday.

Some 1,200 Army and Air National Guard troops will be in place for a year to assist the border patrol in monitoring and capturing illegal immigrants crossing the border into the United States.

They will served as a "gap-filler" while the U.S. Customs and Border Protection agency hires additional staff to fill the demand in protection along the almost 2,000-mile-long southern border with Mexico.

The troops, from the four border states, will be fully trained and in place in California, Arizona, New Mexico and Texas by September 1, according to Gen. Craig McKinley, commander of the National Guard.

The Guard troops will not be involved in law enforcement activities such as arrests of illegal immigrants, but will assist border patrol officers looking for the illegal border crossers and smugglers as well as in intelligence gathering. The airmen and soldiers will be armed, but they will be limited by rules of engagement that allow them to shoot only to defend themselves, McKinley said.

"The rules for the use of force will be well-coordinated, and they're the same as our counternarcotics teams that are there now -- for self-preservation only, self-defense only," he said.

The point also was emphasized by Alan D. Bersin, commissioner of U.S. Customs and Border Protection. "The National Guard is there to support the efforts of law enforcement, not to have a direct law enforcement role, not to confront, unless confronted, any particular threat," he said.

The deployment is part of President Barack Obama's border plan announced in late May, when he also requested $500 million in supplemental funds to try to reduce the number of immigrants and smugglers crossing the border daily.

Guard troops will be doled out along the border where the needs are the greatest, according to federal officials.

"We're placing a particular emphasis on the Tucson sector in Arizona, an area favored by smugglers and the principal point of illegal entry into the United States along the southwest border," said John Morton, assistant secretary for immigration and customs enforcement at the Department of Homeland Security.

Arizona will receive most of the forces with 524 troops, while Texas will get 250, California 224 and New Mexico just 72, officials said Monday. Additional troops will perform administrative work.

Customs and Border Protection will transfer six more aircraft and 300 border agents to the Tucson sector of the border where an increase in human smuggling and illegal border crossings have been occurring, Federal officials said Monday.

Additionally, Morton said a new investigative office for the border patrol would be opened in the Arizona border town of Ajo as well as the deployment of a border enforcement security task force jump team of specially trained agents in Douglas, Arizona, also along the border.

The supplemental funding asked for by the president will also fund two new unmanned aircraft, known as Unmanned Aerial Vehicles, to monitor the border around Arizona, according to a homeland security official familiar with the new border plan.

McKinley said that while the United States is still fighting two wars in Iraq and Afghanistan, the Guard troop deployment will not affect operations in those areas.

"I cannot see a case where we would be overextending the National Guard in this effort," he said.

McKinley also said no deployments to the war zones were adjusted to allows these troops to go to the border.