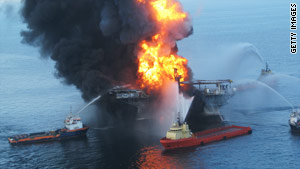 Transocean commissioned the survey of about half its staff aboard the Deepwater Horizon.
STORY HIGHLIGHTS

(CNN) -- A confidential report on safety conditions aboard the Deepwater Horizon oil rig, conducted about one month before the rig's explosion, points to widespread fear of reprisal for reporting employee mistakes that could undermine safety aboard the rig.

"There was a stated fear of reprisal related specifically to the reporting of dropped objects," states an executive summary of the report obtained by CNN.

"Only 46.3 percent of participants felt that, if their actions led to a potentially risky situation (e.g., forgetting to do something, damaging equipment, dropping an object from height), they could report it without any fear of reprisal," the report states.

Transocean, the rig operator, commissioned the survey of about 40 employees, about half its staff aboard the Deepwater Horizon.

Video: Over Gulf oil in a blimp

Video: No decision on whether to halt Gulf cleanup
RELATED TOPICS

The report concluded, "Deepwater Horizon was relatively strong in many of the core aspects of safety management." But it also uncovered fear among workers of suffering reprisal for reporting conditions that could lead to a "risky" situation onboard the rig.

The study also found some Transocean employees entered fake data to try to circumvent a safety system, according to a person familiar with the full report.

The study was based on surveys conducted March 12-16 by Lloyd's Register Group, a consultant that analyzes the safety of business processes and products. The Deepwater Horizon rig exploded the night of April 20 while drilling BP's Macondo oil well. Two days later it sank. The Lloyd's report was completed afterwards; it is dated May 11.

Lloyd's said it was retained by Transocean to "proactively understand their safety culture and assess the equipment on the Deepwater Horizon." Transocean has commissioned safety surveys of its staff aboard 20 other drilling rigs.

A spokesperson for Transocean insisted the study of employees aboard Deepwater Horizon reflected the company's commitment to safety.

"This rig did go seven years without a lost-time incident or any major environmental accidents," said spokesman Lou Colasuonno. "This rig was exhibit-A for a well-run rig."

In assessing the safety culture onboard the rig, the consultants gave ratings of between 2.9 to 3.5 on a scale of 1 to 5 for policies such as leadership, communication, training and monitoring.

A separate report by a different Transocean consultant on the Deepwater Horizon's equipment cited at least 26 components and systems out of 129 categories on the rig that were in "bad" or "poor" condition, according to a report in Thursday's New York Times.

Transocean's spokesman told CNN all equipment on the Deepwater Horizon was in line with government guidelines. "Every device met regulatory standards," Colasuonno said.