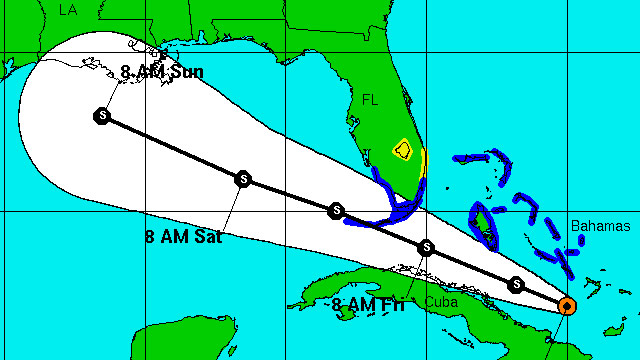 The National Oceanic and Atmospheric Administration shows the projected path of a tropical depression in the Gulf of Mexico.
STORY HIGHLIGHTS

Miami, Florida (CNN) -- A weather system moving over the southern Bahamas has been upgraded to a tropical storm, with sustained winds now reported at 40 miles an hour, as it heads toward the southern tip of Florida and the Gulf of Mexico.

The system has been named Tropical Storm Bonnie. At 11 p.m. ET, it was moving northwest at 14 miles an hour as it approached the northwestern Bahamas, according to the National Hurricane Center.

It could pick up strength as it moves over the long stretch of open water in the Gulf of Mexico, but the latest computer models do not show it becoming a hurricane, according to CNN meteorologist Chad Myers.

Forecasters had predicted that it would cross over central Florida, but the models now show it passing farther south, over the Florida Keys or the Straits of Florida and then into the Gulf.

The storm is expected to pass the southern tip of Florida on Friday afternoon and then make landfall Sunday between New Orleans and the Beaumont-Port Arthur area in southeastern Texas. Myers said it's more likely to bear down on Louisiana. And on that path, it could push oil in the Gulf from the BP oil spill to shore.

But at this point, no oil has spilled into the Gulf for the past seven days, with BP's crippled well contained with a cap that appears to be bearing up under "integrity" tests. BP's chief operating officer, Doug Suttles, said Thursday that skimmers had been able to recover only 56 barrels of oil the day before, because that's all they could find.

With the weather turning bad, BP has suspended work on a relief well to permanently seal the damaged well. And late Thursday, the federal official overseeing the effort, retired Adm. Thad Allen, ordered ships in the area to come to shore. That could delay operations at the well site for 10 to 14 days. But Allen said there's enough confidence in the well that it will be left capped and closed during the rough weather.

Ships used to skim oil off the surface are likely to have to come ashore as well. Currently, 215 are operating off the coast of Louisiana.

Louisiana Gov. Bobby Jindal has issued an emergency declaration, intended to speed state help to parishes that need it, when the storm hits. He said mandatory evacuations are not expected, but parishes might call for voluntary evacuations in some low-lying areas.

The weather system is drenching the Bahamas and has caused flooding in Puerto Rico, Haiti and the Dominican Republic.

Tropical storm warnings have been issued for Florida's east coast, from Golden Beach south to the Keys, and along the west coast, northward to Bonita Beach.

In Monroe County, Florida, which comprises the Keys, officials warned boaters to secure their vessels and remain in port until winds and seas subside. They warned drivers to use extreme caution on the Overseas Highway, especially on exposed bridges.

The hurricane center predicted that the storm would bring 2 to 4 inches of rain to south Florida, with isolated areas receiving as much as 6 inches. The central and northwest Bahamas are likely to receive slightly more, the hurricane center said.