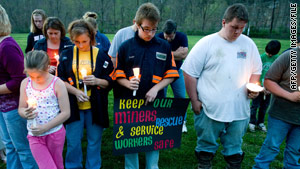 (CNN) -- The West Virginia coal mine where 29 miners died in an explosion in April had a sudden and large inundation of methane gas the day of the accident, the mine owner said Thursday.

It is still too early to determine what caused the April 5 explosion, but the methane gas data is a "very important piece of evidence" in the ongoing investigation, said Christopher Schemel, a leading explosions expert and a member of the investigation team.

Investigators tested data from the mine's primary ventilation exhaust fan and found the unexpected release of gas was intense and overwhelmed the normal safety systems, the company said.

"To put it in perspective, a methane release of this size would completely fill a 2,000 square-foot house with an explosive atmosphere in under 40 seconds, and could fill the volume of a typical mine entry to explosive levels in under 25 seconds," Schemel said.

The explosion at the Upper Big Branch mine in Naoma, about 30 miles south of Charleston, was the industry's worst disaster in 40 years.

The investigation since then has focused on the mine's poor safety record and Massey's response to problems in the past.

A preliminary report on the disaster by the federal Mine Safety and Health Administration found that the Upper Big Branch mine had "a significant history of safety issues" and that the agency was closely monitoring Massey Energy.

In 2009, federal inspectors issued 515 citations and orders at the Upper Big Branch mine, with 39 percent of them for "significant and substantial" violations.

More than 50 of the citations were for problems that the operators knew about but had not corrected, according to federal mine safety records.

Thirty-one men were working in the mine when the explosion happened on a Monday afternoon.

Most of the blast victims were working in an area where long wall cutting was taking place. The technique uses a large grinder to extract the coal and creates large amounts of coal dust and methane gas, both of which are explosive.

Recovery crews found some of the bodies in a section of the mine where readings showed high levels of gases, and the crews needed breathing gear to enter, said Jama Jarrett, spokeswoman for the West Virginia Office of Miners' Health, Safety and Training.

Rescuers had to use high-pressure fans to pull the toxic air through holes to the surface.