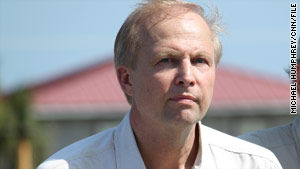 (CNN) -- "The task that's laid out before us is very clear right now," the man in charge of the federal Gulf of Mexico oil crisis response said Tuesday.

"We have absolute priorities," retired Coast Guard Adm. Thad Allen said, "on killing the well, maintaining the recovery, making sure the oil is all removed and making sure the beaches are cleaned up and that the commitment by BP to the people is met."

Crews are back on track to permanently shut down BP's once-gushing wellhead in the next few weeks, if setbacks are avoided and weather permits.

Allen, speaking in a teleconference, reiterated that he expects the first step to begin Monday. The process, called a "static kill," involves pouring mud and cement into the well from above.

As soon as five days afterward, once cement dries around a casing, said Allen, the "static kill" would be followed by a "bottom kill," sealing the sunken well permanently from the bottom through an intersecting relief well.

But Allen noted that despite the progress, the situation is still serious in the region.

Video: Hayward out, Dudley in

Video: Plan for the relief well

"When you put somewhere between 3 million and 5.2 million barrels of oil into the Gulf of Mexico, I don't think anybody can understate the impact and the gravity of that situation," he said.

Still, it's getting harder and harder to find oil on the surface. The federal on-scene commander, Coast Guard Rear Adm. Paul Zukunft said a fleet of 800 skimmers were able to collect only one barrel of oil Monday.

At the height of the spill, they were collecting 25,000 barrels of oil a day.

Zukunft said the spilled oil is "in its final life cycle," he said.

At the well site, crews working on the ruptured, but capped, oil well have once again connected through the relief well to existing underwater equipment, BP said Tuesday.

The workers had been forced to disconnect their equipment and retreat from the well site late last week, when Tropical Storm Bonnie loomed as a potential threat. But when Bonnie lost power, workers returned to the site over the weekend.

BP said it planned to test the blowout preventer on the well later Tuesday, and then run casing pipe later this week as a prelude to the final shutdown.

Allen outlined the timetable as rigs drilling the relief wells and other ships returned to the scene amid calmer waters. Evacuations ahead of Tropical Storm Bonnie delayed efforts to seal the well for about a week.

All indications are that the well is structurally sound 11 days after valves on the new containment cap were closed, stopping oil from spewing into the Gulf after three months of relentless flow.

The latest readings showed the cap is holding, and there don't appear to be any leaks from the well -- conditions that are essential before it can be sealed from the top and bottom through the two methods.

The American set to take over BP said Tuesday that in the aftermath of the oil spill, he's "sure there will be changes" in the oil industry.

"There's no question we're going to learn a lot from this accident in the Gulf Coast. It's going to be about equipment, people, different companies, and as a result of that, we're going to learn a lot, both BP and the industry," Robert Dudley told reporters outside BP headquarters in London, England, as he emerged alongside BP Chairman Carl-Henric Svanberg and outgoing Chief Executive Officer Tony Hayward.

In a webcast after his ouster was made public, Hayward declared that the Gulf disaster represents a failure for the entire deepwater oil and gas drilling industry, not just for BP alone.

"The industry needs to re-evaluate safety," Hayward told investment professionals via the webcast. "Everyone will re-evaluate the business model to reduce risk associated with deepwater drilling."

"It is clear the accident was the result of multiple equipment errors and human error involving many companies," he added.

Dudley said he and Hayward would "work through a transition" in the coming months.

Svanberg told reporters he has no plans to step down.

"I serve at the pleasure of the board, and they have repeatedly and explicitly asked me to stay on, and that's what I'm doing," he explained.

Dudley is a long-time BP employee with more than 30 years in the oil business. A chemical engineer by training, he was put in charge of the day-to-day leadership of the Gulf spill cleanup operation in June.

Some relationships in Washington are quite strained. Rep. Kathy Castor, D-Florida, who represents the Tampa area, told a House subcommittee assessing the impact of the oil spill on Gulf coast tourism that "the efforts of BP to date have been inadequate, to say the least."

"What is particularly maddening is, we watch these incessant ads -- full-page ads -- by BP that are polishing their corporate image at a time where they should be devoting a good portion of these monies to helping small business owners, our hotels, get back on their feet," she said Tuesday.

BP documents sent to the U.S. Coast Guard this month provide what one lawmaker is calling Tuesday a "smoking gun" -- showing how much oil spewed from the oil giant's crippled well into the Gulf of Mexico.

"This is the smoking gun we've been waiting for, where BP finally admits in writing the true magnitude of this spill could be at least 53,000 barrels a day," said Rep. Edward Markey, D-Massachusetts, who heads the House Energy and Environment Subcommittee

The figure comes from documents Markey received during the committee's investigation into the disaster.

Although a statement from Markey touted the figure as "BP's first admission ... that the spill could be so large," BP Chief Operating Officer Doug Suttles estimated the flow from the well at 53,000 barrels per day in a June 6 interview with CNN.

Markey cites letters Suttles sent to the Coast Guard on July 6 and July 11, saying that they should "assume flow rate of 53,000" barrels of oil spilled per day when determining the amount of dispersants to be used for cleanup.

BP and the Coast Guard initially estimated 1,000 barrels of oil a day were leaking from the well, but that estimate proved wildly inaccurate. Scientists later bumped the estimate to between 35,000 and 60,000 barrels.

Under current law, BP would have to pay up to $4,300 per barrel of oil spilled if the company is found to be guilty of gross negligence, according to Markey's committee. BP ultimately could pay billions of dollars in fines in addition to the billions it's already spent on cleanup and compensation.

Markey announced his "smoking gun" only hours after BP said Hayward will step down as chief executive of the company.

BP crews managed to temporarily cap the undersea well at the heart of the disaster on July 15.

Oil had gushed from the ruptured well for nearly three months after the Deepwater Horizon rig exploded April 20, leaving 11 workers dead. Officials have said the relief well is the only permanent solution to the disaster.