Top military official: WikiLeaks founder may have 'blood' on his hands 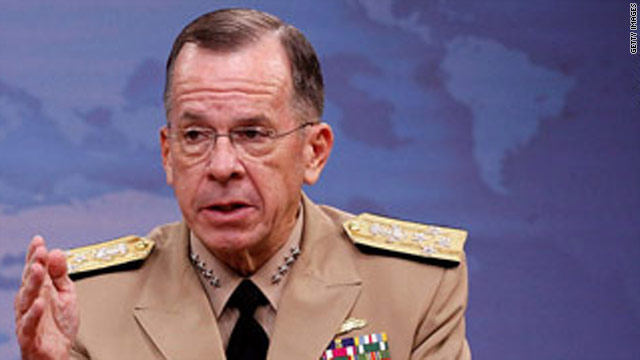 WikiLeaks may have 'blood' on hands
STORY HIGHLIGHTS
RELATED TOPICS

"Mr. Assange can say whatever he likes about the greater good he thinks he and his source are doing, but the truth is they might already have on their hands the blood of some young soldier or that of an Afghan family," Adm. Mike Mullen, chairman of the U.S. Joint Chiefs of Staff, said at a news conference at the Pentagon.

In equally stern comments and at the same session, Secretary of Defense Robert Gates said the massive leak will have significant impact on troops and allies, giving away techniques and procedures.

"The battlefield consequences of the release of these documents are potentially severe and dangerous for our troops, our allies and Afghan partners, and may well damage our relationships and reputation in that key part of the world," Gates said. "Intelligence sources and methods, as well as military tactics, techniques and procedures will become known to our adversaries."

Gates said the United States has been contacted by Afghanistan, Pakistan and "other governments" concerned about the leak. One of the lasting impacts, he said, is rebuilding trust that the U.S. military can keep secrets secret.

Assange has refused to say where his whistle-blower website got about 91,000 United States documents about the war. Some 76,000 of them were posted on the site Sunday in what has been called the biggest leak since the Pentagon Papers about the Vietnam War.

"I spent most of my life in the intelligence business, where the sacrosanct principle is protecting your sources. And that involves your sources trusting you to protect them and to protect their identities," Gates said. "That is one of the worst aspects of this, as far as I'm concerned. Will people trust us? Will people's whose lives are on the line trust us to keep their identities secret? Will other governments trust us to keep their documents and their intelligence secret?"

Gates said he called the FBI director to partner with the Pentagon in investigating the leak.

The defense secretary said the Pentagon is also reviewing procedures for handling classified information, which could affect the flow of valuable information to troops.

"In the wake of this incident, it will be a real challenge to strike the right balance between security and providing our frontline troops the information they need," Gates said. "We want those soldiers in a forward operating base to have all the information they possibly can have that impacts on their own security but also being able to accomplish their mission."

Perhaps surprisingly, the defense secretary said it was "only very recently" that he was made aware of the magnitude of the number of documents" that had been leaked. One of the main suspects in the current document leak investigation, according to military officials, had been arrested back in the spring and eventually charged with downloading thousands of documents and a video of a 2007 airstrike in Iraq that was published earlier this year by WikiLeaks.

Gates said the defense department did not know how many more documents were out there.

"The reality is, at this point, we don't know how many more there are out there ... it could be a substantial additional number of documents, and we have no idea what their content is, either," he said.

For those put at risk by the documents, the defense secretary said the U.S. has a "moral obligation" to protect those whose names appear in the documents.

WikiLeaks' founder has said the organization held back thousands of documents in order to redact information that could put people at risk. But CNN's own review of documents found instances of names of informants and those who cooperated against the Taliban, as well as names of suspected insurgents who were being watched.