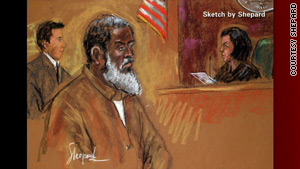 Russell Defreitas is sketched during his court appearance for the JFK conspiracy.
STORY HIGHLIGHTS
RELATED TOPICS

Russell Defreitas and Abdul Kadir were accused of conspiring to blow up JFK's jet-fuel supply tanks and pipeline in 2007.

Kadir was found guilty on five of the counts, but not guilty on the count of surveillance of mass transportation facility.

DeFreitas is a United States citizen and former JFK cargo worker. Kadir is a citizen of Guyana who has served as a member of parliament there.

A third defendant, Abdul Nur, pleaded guilty in June to providing material support to terrorists. Nur is also from Guyana.

Prosecutors have said the men tapped into an international network of Muslim extremists to develop the plot and start work toward carrying it out.

A criminal complaint accused the men of obtaining satellite photos of the airport and using DeFreitas to conduct surveillance and identify potential targets and escape routes.

An informant secretly taped conversations in which DeFreitas allegedly described the symbolic importance of targeting JFK, the complaint says.

"Anytime you hit Kennedy, it is the most hurtful thing to the United States," he allegedly said, according to the complaint. "If you hit that, this whole country will be in mourning. It's like you kill the man twice."

All three men have been in U.S. custody for the past two years after a court in Trinidad and Tobago rejected their attempt to avoid extradition.

New York Police Commissioner Raymond Kelly has said officials were concerned not only about a possible attack on the airport, but also about an attack on the 40-mile aviation fuel pipeline that runs from a fuel tank farm at JFK through Staten Island, Brooklyn and Queens.