By Mike Chinoy Special to CNN 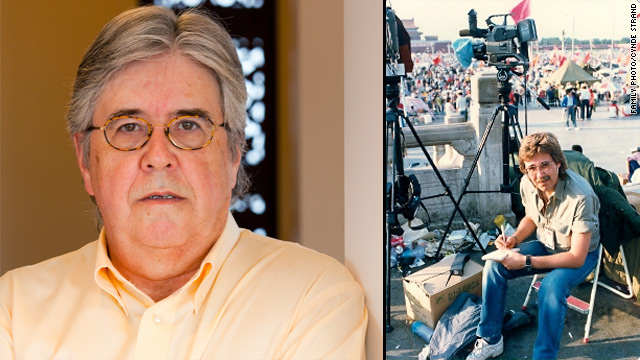 John Lewis in a family photo (left) and in Tiananmen Square in 1989.
STORY HIGHLIGHTS

Former CNN correspondent John Lewis died on July 29. CNN's first correspondent in Asia, he spent 18 years in the region and worked on some of the biggest stories CNN has covered. Here he is remembered by colleague Mike Chinoy, a CNN international correspondent for 24 years. Chinoy is now a Senior Fellow for the U.S.-China Institute at the University of Southern California and Vice President and Managing Director for Asia for media training company NewsCertified Exchange.

(CNN) -- It was February, 1986. In Manila, President Ferdinand Marcos had just rigged an election that almost all independent observers believed had been won by opposition candidate Corazon Aquino. Protests were spreading. The country was in crisis.

At the CNN workspace in a dingy downtown hotel, John Lewis had not slept in days. Unshaven, bleary-eyed, chain-smoking, but completely calm and totally in control, he was coordinating the efforts of an over-worked, under-staffed team trying to keep on top of a fast-moving story.

Late one Saturday afternoon, the phone rang. One of John's many sources was calling. The army was about to revolt. Anti-Marcos soldiers were en route to a key military base. John immediately sent me and a crew.

We arrived almost literally as the rebellious soldiers showed up to occupy Camp Crame, which quickly became a rebel headquarters, and a key focal point for the "People Power" revolt which soon forced Marcos from power.

That John got the first tip-off was hardly surprising. He'd been in Asia for years, seemed to know everyone, and had a depth of understanding of the region few journalists could match. Whether it was Manila, Karachi, Delhi, Seoul, Rangoon, Beijing, or Tokyo, he was a master at operating in one of the most complex regions in the world.

In Burma, after a military junta crushed pro-democracy protestors and banned foreign journalists, John used his resources to secure permission for CNN to make an exclusive visit.

And then, on the streets of Rangoon (now called Yangon), he artfully distracted our heavy-handed government minders so our crew could get the pictures we needed without being stopped.

In India, following the assassination of Prime Minister Indira Gandhi, we needed to keep an international phone line open from our hotel to CNN headquarters for hours so we could provide live commentary on Gandhi's funeral.

In a country with a notoriously erratic phone system, John found the solution. He paid the hotel operator to block all other calls and hold the line exclusively for us.

In Beijing, during the student protests in the spring of 1989, he literally lived in Tiananmen Square for days, surviving on candy bars, instant noodles, and cigarettes, to keep tabs on a story as dramatic as it was complex.

And when Chinese officials barged into CNN's Sheraton Hotel workspace to order the network to cease its live broadcasts after the government declared martial law, it was John, along with anchor Bernie Shaw, Moscow correspondent Steve Hurst and me, who remained on the air -- in one of the most memorable moments in the history of TV news -- providing commentary and analysis literally until the moment the authorities pulled the plug.

And John did all of this in his own, inimitable style. He never took himself too seriously. His sardonic wit deflated the pompous and self-important, and helped take the edge off the tension in countless crises we covered. He never got rattled, never lost his cool.

The worse the situation, the more we laughed. He dubbed the $2 a night fleabag hostel we stayed in Kashmir "the Muzaffarabad Hilton." He opened every phone call with a cheery "Yo dude!" He spoke fluent Japanese, but loved the crude humor of "Beavis and Butthead." He was the opposite of "political correctness."

Journalism, however, he took extremely seriously. He was a relentless, meticulous reporter, with little patience for those not willing to make the same commitment -- of time, effort, and intellectual energy. And he had an instinctive ability to connect with an astonishing variety of people.

In Vietnam in the mid-90s, we visited a hospital. It turned out the doctor we were interviewing had fought with North Vietnamese troops in Hue during the Tet offensive of 1968 -- the city where John, then serving in the U.S. army, had been seriously wounded.

Typically, instead of the encounter being awkward, John used the shared experience of battle to bond with his former enemy. The Vietnamese, in response, showed him enormous respect. Our story was much richer for it.

But he was equally comfortable connecting with the Japanese corporate titans as CNN built a journalistic and business presence in Japan.

CNN's top management relied on his expertise and judgment, and often sent him elsewhere in the region to build bridges.

John was an international correspondent for years, yet he never lost the excitement of the chase for a good story. His curiosity was limitless, as was his enthusiasm for the unusual, the remote -- for him, the further off the beaten path the better.

He was the first full-time correspondent CNN hired in Asia. For more than 20 years, 18 of them in Asia, CNN's audience benefited from his deep insights and ability to explain a complicated part of the world in an easily understandable way.

Those of us who had the privilege of working with him benefited from his savvy, street smarts, humor, and friendship. He was an original.

We -- and the world of journalism - will miss him.