Leak suspect had been disciplined at least twice before arrest

By the CNN National Security Team 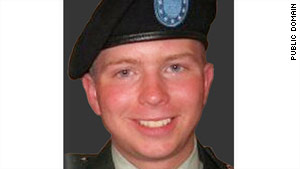 Pfc. Bradley Manning, a suspect in the leaking of military documents to WikiLeaks, is being held in Virginia.
STORY HIGHLIGHTS

Washington (CNN) -- The leading suspect in the leaking of thousands of military documents to WikiLeaks had been disciplined at least twice in the previous three years but maintained his security clearance.

Pfc. Bradley Manning already was facing military charges for allegedly leaking a 2007 Iraq battle video to the WikiLeaks website and for downloading sensitive documents. Now, according to military sources, he is the lead suspect in the investigation into the leaked documents.

But the recent incidents are not his first brushes with problems in the Army. CNN confirmed that during his training to become an intelligence analyst, Manning was reprimanded by commanders at Fort Huachuca, Arizona.

She would not elaborate on how he broke the rules.

Wired.com recently reported that he was punished for uploading videos on YouTube in which he talked about classified buildings at the base and classified materials he saw.

Manning did not disclose classified information in the videos, but did discuss the rooms where secure information was held, which was considered a security risk, Wired.com reported.

Despite the punishment, Manning graduated from his training in August 2008 as an intelligence analyst with security clearance.

But just a couple of months before Manning was arrested this spring, he was disciplined again, according to a military official. The official asked not to be identified because he was not authorized to speak on the record.

Manning had gotten into a fight with another service member, according to the military official, although the circumstances are unclear. As a result, Manning was demoted a stripe, from specialist to private first class.

Manning had "top secret" and "sensitive compartmentalized information" clearance, according to a military official. Top secret is a lower-level of clearance, but SCI-level information is on a "need to know" basis and codes may be required to gain access to it.

Military sources say the Department of Defense spends significant amounts of money and time training those with this level and clearance. If an individual has behavioral issues that are not related to classified information and superiors believe it is a matter that is fixable, then the individual would be disciplined rather than having access restricted or removed.

Mathew Tully, founding partner with the Washington law firm of Tully Rinckey and an expert on military law, said the YouTube video was about operational security, not national security, and therefore was probably considered differently. As for the fighting: where youth, stress and alcohol may be involved, "it is not uncommon for altercations to occur."

Of course, he said, with 20-20 hindsight "someone should have looked a little closer."

Manning continues to be held in solitary confinement at the Quantico Marine base in Virginia. He has received visitors, according to Lt. Scott Villiard, a spokesman for the base. All the visitors were "duty-related," no family or friends, according to Villiard.

When Manning goes before a military judge for an Article 32 hearing, a military procedure similar to a civilian grand jury, part of the hearing may be closed to the public.

Manning is accused of leaking classified information to the WikiLeaks website, including the video of a deadly U.S. helicopter attack in Iraq.

"In general, Article 32 hearings are open," said Col. David Lapan, a Pentagon spokesman, "but because of the nature of this, with classified information, there may be open and closed portions. We'll just have to see."

Manning has three military lawyers but has yet to retain a civilian lawyer, according to the Quantico spokesman.