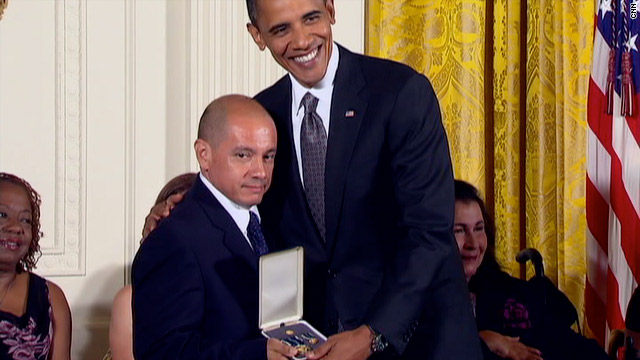 Munoz was one of 13 everyday Americans who received the Presidential Citizens Medal, the second-highest civilian honor, behind the Medal of Freedom.

Awarded at the sole discretion of the president, the Citizens Medal recognizes those who have performed exemplary deeds of service for their country or fellow citizens.

"What unites these citizens -- what makes them special -- is the determination they share to find a wrong and right it; to see a need and meet it; to recognize when others are suffering and take it upon themselves to make a difference," Obama said. "These honorees' lives stand as shining examples of what it means to be an American. And today, we have an opportunity to tell their stories; to say thank you; and to offer them a small token of our appreciation."

This year's recipients come from across the country. Munoz, a school bus driver in New York, was a CNN Hero in 2009.

Every day for the past six years, Munoz has been preparing and distributing free meals under an elevated train in Jackson Heights, Queens. His clientele includes the homeless and the unemployed.

"When I see these guys on the street," Munoz said last year, "it's like seeing me 20-something years ago when I came to this country."

Munoz, born in Colombia, became a legal U.S. resident in 1987 and later became a citizen along with his mother and sister.

"Jorge Munoz recognizes that we all have a stake in one another," the White House said. "By giving his time, energy and resources to feeding the hungry, he has demonstrated the enduring American values of sacrifice and kindness."